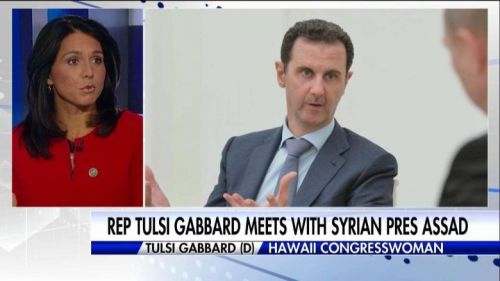 Democratic Rep. Tulsi Gabbard of Hawaii has announced that she is running for president in 2020. Gabbard said in a CNN interview slated to air Saturday night that she will be formally announcing her candidacy within the next week. Gabbard took money from Assad now wants The White House.

The 37-year-old is the first U.S. Presidential candidate who visited Baschar al-Assad in Syria. She then questioned his chemical attacks against women and children. After siding with the mass murderer, Gabbard took money from his agents operating out of Cleveland, OH. Gabbard supported Assad publicly, got paid for it.

If you visit Assad and sing his praises, how far do you think before you praise his master Vladimir Putin, or worse, accept money funneled through his oligarchs to get you elected? If Gabbard took money from an Assad Lebanese-American supporter, she will certainly take money from a Russian-American Putin supporter. Gabbard is just a new Putin poodle waiting to serve her master.

The FBI should definitely take a close at her travels, emails, associations, and connections abroad given she received money from Elie and Bassam Khawam, both Assad agents operating in the United States. The Washington Post wrote this about Impostor Tulsi Gabbard:

The Bashar al-Assad regime in Syria has had a quiet but well-funded lobbying effort in Washington since well before he began murdering his own people. But that influence campaign’s clearest triumph came only this month, when it succeeded in bringing Rep. Tulsi Gabbard (D-Hawaii) to Damascus and having her parrot Assad’s propaganda on her return.

After the killing began in 2011, however, Assad’s friends in Washington largely went underground and a covert influence and intimidation campaign blossomed. The FBI began investigating Syrian ambassador Imad Moustapha, due to evidence he was keeping tabs on Syrian Americans who showed disloyalty so the Syrian government could threaten their families back home. Moustapha departed for Beijing in 2012, but he left in place a network of friends, Syrian Americans and others who nurtured close ties to the regime and worked on Assad’s behalf.

One Lebanese American who was close to Moustapha and would often visit his Washington residence was Cleveland businessman Bassam Khawam, according to three Syrian Americans who saw them together but do not wish to be identified for fear of retribution. Five years later, Moustapha is nowhere to be seen, but Khawam is still active. He organized and joined the trip to Damascus for Gabbard and arranged a meeting with Assad.

TAKING MONEY SOAKED IN BLOOD OF INNOCENT WOMEN AND CHILDREN

Thinks about it. Gabbard took money from Assad now wants The White House. Sounds familiar with what is going on today?

Gabbard is joining a crowded Democratic field. Sen. Elizabeth Warren of Massachusetts has already formed an exploratory committee and is moving quickly with trips across early primary states. California Sen. Kamala Harris, New Jersey Sen. Cory Booker and Vermont Sen. Bernie Sanders are all weighing their own presidential bids and are expected to announce decisions in the upcoming weeks. Former Obama administration housing chief Julian Castro plans to announce his run for the presidency on Saturday.

But none of the above candidates has any close ties to a mass murderer; or the people he associates with. Such as Ayatollah Khamenei of Iran or Vladimir Putin of Russia, or Nasrallah of Hezbollah.

SHE MET WITH TRUMP. ON WHOSE ORDERS?

In 2016, she alarmed fellow Democrats when she met with Donald Trump during his transition to president. Another Putin connection the FBI must investigate. First Gabbard took money from Assad now wants the White House, then she visits with a Republican all the Democrats hate the Justice department is investigating for possibly laundering money from Assad master Vladimir Putin. The coincidence is alarming.

For those who believe she is a progressive politicians, check what real progressives wrote about her in this damning article.

Gabbard is already walking the traitor line with her politics. Any closer to the White House, we believe she is a national security threat to this country.