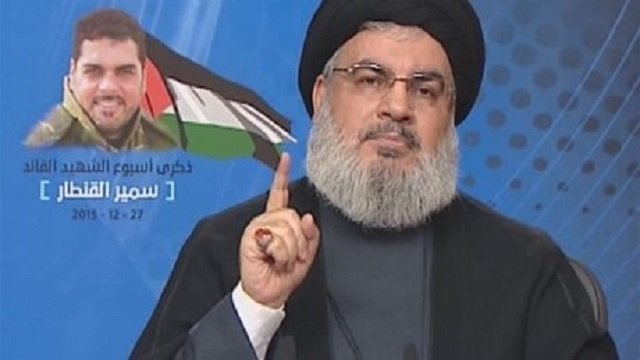 Haul the Criminal Hassan Nasrallah to The Hague

December 27, 2015 11:29 am 2
Question for Israel: When Will Gorilla Nasrallah Meet His Maker?
Hezbollah is Cornered, Thank the Syrian People
Watch The Three Musketeers of Terror Lose Their Marbles

Why can’t the international community haul the criminal Hassan Nasrallah to The Hague? He killed scores of Syrian women and children, Israeli soldiers and Jewish civilians, Rafik Hariri, Mohammad Shatah, Gibran Tueini, George Hawi, and so many other Lebanese journalists and politicians. The man is a criminal sociopath.

Honestly, what is the purpose of international laws, the International Court of Justice, the United Nations, and the Western civilization if we cannot haul the criminal Hassan Nasrallah to the Hague.

This savage barbarian just issued more threats on Sunday. He reiterated his pledge that his group will retaliate against Israel over the assassination of its senior operative Samir al-Quntar. Samir al-Quntar is a child killer.

“The retaliation to Samir’s assassination will inevitably come,” Nasrallah vowed in a televised speech marking one week since Quntar’s death in an air raid in Syria that Hizbullah has blamed on Israel.

Nasrallah noted that the timing and place of retaliation is now in the hands of Hezbollah’s fighters and military commanders. In other words, the last week we were busy planning to kill people. Where in the hell is the international community to haul this criminal to The Hague?

He noted that Samir al-Quntar has become “an icon for the school of resistance.”

“After he was freed from prison, Samir could have lived a normal life among his family and friends, and he could have stayed in the axis of resistance without getting involved militarily, but he refused to do so,” Nasrallah said.

“It was one of the ideas I proposed to him and I told him that he could play an intellectual role,” he revealed.

Referring to Quntar’s role in the so-called Syrian Resistance for the Liberation of the Golan, Nasrallah added: “When the activities of the resistance started near the Golan, Israel grew very anxious, and it started retaliating in a disproportionate manner to any shelling or gunfire on the border, even if it did not cause casualties.”

Syrians never asked Hezbollah to fight on Syrian soil. It’s not their business to free the Golan Heights. This is an issue to be decided by the Syrian people, not some sociopath criminal like Nasrallah.

Hezbollah played a key role in Quntar’s release after he had spent 30 years in Israeli jails for butchering Israeli children, becoming known as the longest-serving Arab prisoner.

Haul the Criminal Hassan Nasrallah to The Hague

Hezbollah is Cornered, Thank the Syrian People
Do Unto Others..
The White House in the Bunker House
Radicalism 567