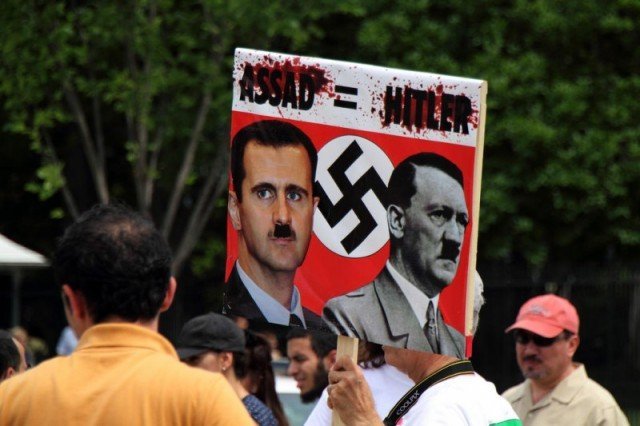 August 17, 2014 11:29 am 0
Assad must be dreaming he can glue Syria together
Red Cross condemns Syria aid blockades
The Savages in Damascus

Assad, Khamenei, and Nasrallah are to Syrians what Hitler, Himmler, and Heydrich were to the Jews of Europe. The atrocities the trio have committed against Syrians do not measure up to what the Nazis did to the Jews during WWII, but within the smaller region of the Levant, Assad, Khamenei, and Nasrallah conform to the same level of violence and terror the world has witnessed on a world war scale.

Syrian-Americans cannot help but wear two hats. As Syrians, Assad represents the clearest of dangers to Syria and its people regardless of ethnicity or religious sect. As Americans, ISIS represents a greater danger to American interests. The ideal world would be if ISIS and Assad annihilated each other.

Since Mr. Obama is conducting a war against ISIS in Iraq and he is not conducting a war against the terror of Assad, Khamenei, and Nasrallah, it is natural for any Syrian-American opposing Assad to wear the Syrian hat more often. This does not mean we are discounting one terror over another. It only means the Syrian people need more help defeating Assad than the Iraqi people need help in defeating ISIS.

When it comes to the Syrian side of ISIS, the organization is helping kill all of Assad?s enemies and until we see Assad attack ISIS with his MIG jet fighters instead of the helpless civilians in Aleppo and elsewhere, we are inclined to ignore the danger of ISIS in Syria when it comes to US interests.

Assad created ISIS and yet everyone seems to ignore this fact when we should call him on it to prevent him from adopting such tactics in the future.

The next time Assad launches another terrorist organization, it may attack Israel from the Golan Heights the same way Hamas attacked from the south and Hezbollah is readying itself to attack from Lebanon. Imagine a coordinated barrage of rockets and missiles from all three sides. Israel will find it quite hard to defend its people from such an attack.

Consider pinning the blame on Assad publicly for forging ISIS as preventive medicine the world needs in order to halt the Assad virus from spreading.