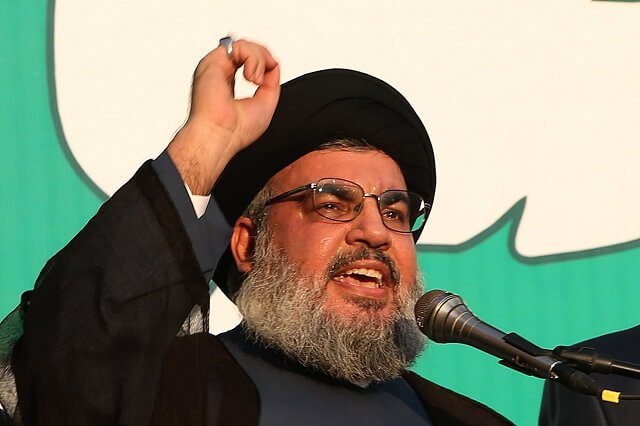 October 24, 2012 10:44 am 0
Soldiers’ Mass Execution Reported by Syria Group
Is Kerry Proposing Assad Alternative to Putin?
Saving Assad will come back to haunt us one day

Source: The Weekly Standard – by David Schenker (Hezbollah Under Pressure)

To many Lebanese, the massive car bomb attack in Beirut on Friday that killed the Sunni Muslim head of internal security Wissam al Hassan and seven others evoked the 2005 assassination of former Lebanese premier Rafik Hariri. Members of the Shiite militia Hezbollah were indicted for the 2005 crime, and the organization—along with Syrian president Bashar al-Assad’s regime—is a leading suspect in this latest outrage. Rather than a demonstration of strength, however, the attack highlights the militia’s sense of insecurity.

For much of the past decade, Hezbollah has struck a cocky pose. But twenty months into a popular uprising in Syria that threatens to topple the Assad regime, interrupt Hezbollah supply lines, and leave the Shiite Party of God surrounded by a sea of Sunni Muslims, the organization is under unprecedented pressure and its normally confident leader Hassan Nasrallah seems concerned. While his speeches continue to reflect their perennial bravado, in recent appearances Nasrallah clearly isn’t looking himself.

Most striking, the once-svelte, turbaned cleric has ballooned into corpulence. Perhaps the bunker lifestyle with its attendant lack of exercise is catching up with the aging sheikh. Or maybe Nasrallah is stress eating. Regardless, images of the now rotund, almost cherubic Hezbollah leader laboriously ascending the podium in September to deliver a fiery “death to America, death to Israel” speech (posted on the organization’s Intiqad electronic magazine website) do not inspire the same level of terror as before.

Today, while the demise of Hezbollah is far from imminent, regional developments threaten to undermine the group’s preeminent position in Lebanon. And the militia has responded by lashing out against (and perhaps killing its) local detractors, highlighting its anti-Israel agenda, and doubling down on Assad. Given the current stresses, it is difficult to predict how this normally disciplined and calculating organization will behave.

Late September in the West Beirut offices of the Union for Lebanese Journalists, a handful of anti-Hezbollah Shiites and reporters held a press conference. The panelists—and several other like-minded Shiites—had lately come under fire by the anti-American, pro-Hezbollah daily Al-Akhbar for their vocal opposition to the militia, a position documented in secret U.S. diplomatic cables published by Wikileaks. While careful to praise Hezbollah “resistance” operations against Israel, the speakers complained bitterly about the Iranian- and Syrian-backed organization’s attempt to enforce ideological hegemony on its Lebanese co-religionists via a campaign in Al-Akhbar—replete with threats of violence—against the so-called “Shiites of the [American] Embassy.”

The Al-Akhbar campaign isn’t the first time Hezbollah has tried to intimidate dissident Shiites into quiescence. The militia, which holds a near political monopoly over Lebanon’s Shiite constituency, has for decades quietly threatened those in the community who deviated from the orthodoxy to question the legitimacy of the group’s arsenal and subservience to the clerical regime in Tehran. (In recent months, the paper had also attacked Wissam al-Hassan for his anti-Assad regime stance). But this orchestrated media campaign against Shiites seemed extreme, even by Hezbollah standards.

To be sure, the Al-Akhbar series is menacing, yet it also suggests a sense of desperation. It’s no secret that Hezbollah has been struggling since the start of the Syrian rebellion. After backing revolts against authoritarian governments in Tunisia, Libya, Egypt, and Bahrain, the self-described “Organization of the Oppressed” found itself in the uncomfortable position of justifying atrocities perpetrated by the despotic Assad regime in Syria. Worse, as the now steady stream of funerals for Hezbollah fighters seemingly confirms, the militia has been deploying troops next door to bolster Assad’s forces.

Rumors of quiet burials of Hezbollah martyrs in south Lebanon have been circulating for months, especially since May when eleven Shiite “pilgrims” were kidnapped in Syria, reportedly including Ali Safa, the nephew of the organization’s leader, Hassan Nasrallah. But Hezbollah only admitted its presence in Syria last week, after a prominent military commander responsible for the Bekaa was killed. Nasrallah talked about Ali Nassif’s death during a televised speech on October 11, describing how his lieutenant died while defending Lebanese—many of whom were Shiite members of Hezbollah—living in Syria.

Hollande: Russia’s Intervention Will Not Save Assad
A Golden Opportunity for US Intelligence to Squeeze Assad
Message to the CIA: When the Attack Dog is at Your Throat, Don’t Fiddle with his Cage Key
Hezbollah Terror 120 Middle East News 220 Syrian Revolution 1352