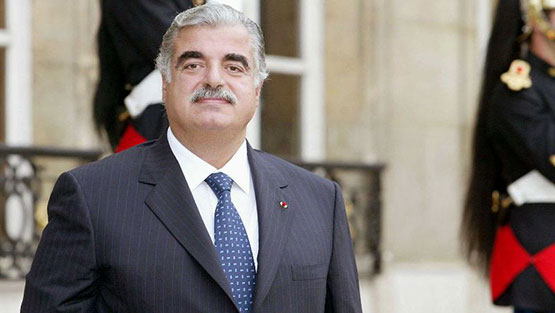 On the 15th anniversary of the death of a great Lebanese politician, his son Saad Hariri, the ex-Prime Minister of Lebanon, spoke about the country’s internal affairs and the financial crisis besieging the country. But what Saad Hariri did not mention was how the axis of evil assassinated the great Rafik Hariri on orders from Assad of Syria, with approval from Khamenei of Iran, and carried out by the evil doer Hezbollah.

Very few politicians can stand shoulder-to-shoulder with the Hariris for their untiring work to rebuild Lebanon from the ashes of its civil war. Only to see most of it squandered by Hezbollah terror working openly for the unabridged interests of a foreign country. How the Lebanese Shia accept a foreign-led entity to rule them is beyond us.

Rafik Hariri gave his life to his country and its people. Undoubtedly, his popularity made him a direct target by the psychos that rule the region with violence and death.

In his speech Hariri raised prickly questions about how the new cabinet, seen as dominated by Hezbollah, could win the badly needed support of countries at odds with Iran, another potential obstacle to its recovery bid.

“Can we establish tourism without Arab and Gulf citizens? Can we open markets for Lebanese goods without having Arab and Gulf markets in particular?” said Hariri.

“Iran’s cash can solve the problems of a party, but not a country’s,” said Hariri, in a pointed reference to Hezbollah.

Lebanon is not a rich country. Its tourism and foreign remittances keep this gem of a nation in the midst of such turmoil region afloat. Hezbollah has killed one source and has laid its bare hands on the second. In the name of resistance to Israel, Hezbollah has stolen every Lebanese Lira it can manage. To the point of Lebanon’s financial collapse.

It is what happens when dumb religious extremists whose main trade is violence suddenly believe they can govern too.

THOSE WHO KILLED HARIRI ARE DYING OR SUFFERING

What very few notice, except those in the know, is how those who planned Rafik Hariri’s murder are dying one at a time, or suffering from the consequences of their actions.

Kiss Imad Mughneyieh goodbye, so do to his mentor Qasem Soleimani President Trump had the courage to send to hell.

After he ordered his assassination, Assad of Syria had to pull his troops out of Lebanon. Fifteen years later, Assad is an embattled ruler of a country in total ruins. Maybe he won his military battles with help from Russia and Iran, but Assad lost the war. Syria will never be the same, ever again. It is a futureless nation ruled by a half-man.

Iran is under immense pressure from lethal sanctions it spends all its energy to circumvent at a great expense. Its domestic popularity is long gone, and the Khamenei’s government is hanging by a thread. The Iranian economy is slowly collapsing and it is a matter of time before the Iranian people rise en masse to claim their country back from a bunch of terrorists ruling it.

How is that for a gift the ex-Prime Minister Saad Hariri can finally reflect upon and quietly enjoy? Well deserved Mr. Hariri.

Maybe we should all celebrate once Nasrallah meets his fate. A bomb to shred him to pieces the way he shred the great Rafik Hariri.

But please don’t keep us waiting for long.