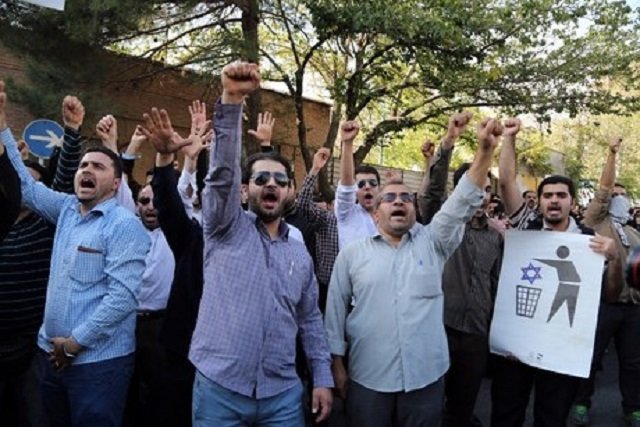 September 27, 2015 11:42 am 0
Iran deploys Army Special Forces to Syria and Iraq
Al-Qaeda behind Libya. But Who is Behind al-Qaeda but Iran and Syria?
Iran’s Khamenei Warns Countries Against Dictating Syria’s Political Future

Hundreds of Iranians chanted “Death to the treacherous House of Saud” outside the Saudi embassy on Sunday as the Islamic republic’s leader demanded Riyadh apologize for the deadly hajj stampede. Iran starting campaign against Saudi Arabia emboldened by the Obama Iran Deal.

Notice the difference between the usual “Death to America” and the “Death to al-Saud” that specifically targets the rulers of the Saudi regime.

The protesters numbering around 400, some throwing tomatoes and watermelons at the embassy walls, were outnumbered by police who erected tall crowd control barriers to keep them back from the compound, an AFP photographer said.

The demonstration came after the toll from Thursday’s stampede in Mina, near Mecca, rose to 769 pilgrims. At least 155 fatalities at the hajj were Iranian and a further 48 remain in hospital.

“Instead of passing the buck and playing a blame game, the Saudis should accept their responsibility and apologize to the world’s Muslims and the bereaved families,” he said.

The Saudis, for their part, accused some 300 Iranian Hajjis of causing the disaster when they began heading the opposite direction of the crowd flow.

Iran has been fiercely critical of the Saudi authorities’ handling of safety and questioned whether the kingdom was fit to carry on organizing the annual pilgrimage.

Iran’s Culture Minister Ali Jannati plans to head a delegation to Saudi Arabia to follow up on 316 Iranians that Tehran says are missing, but state news agency IRNA said his team still has not received visas.

On Saturday, Tehran summoned Saudi Arabia’s charge d’affaires for the third time since the stampede, to press the kingdom for greater cooperation.

“Sadly, Riyadh isn’t offering enough cooperation on the missing pilgrims and the transfer of the dead and injured,” it quoted Rouhani as saying.

“It is crucial that the U.N. remind Riyadh of its legal and humanitarian obligations.”

Don’t believe you can survive what makes you survive
Will the Russians Kill Maher al-Assad?
Oil enriched Assad, Oil may be his demise
Iranian Terror 557