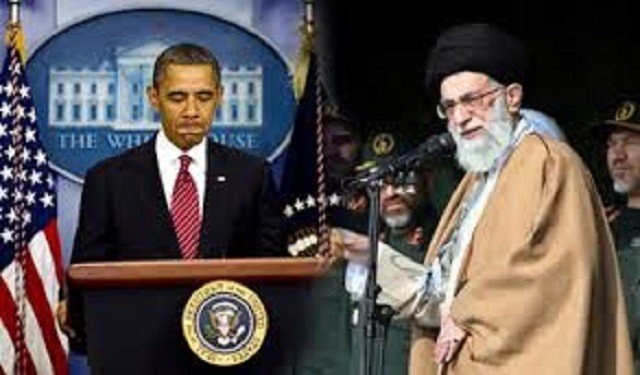 October 22, 2014 7:46 am 0
With Assad Army Collapsing, Government Urges People to Enlist
Roaming Neanderthals in the Assad Regime
The one line the West keeps repeating that is helping Assad win the war

Michael Ledeen has an interesting article published in The Hill describing accurately the close relationships between Obama and Khamenei. If you are in the habit of reading Ledeen’s articles and Blogs, you will know he is the ultimate source on Iran; so much so, the Iranian regime sometimes dedicates front page articles in major newspapers to revile him.

In the article, Ledeen writes:

Long the goal of Obama, who sent a private emissary to Tehran as early as the 2008 election campaign to tell the Khamenei regime he wanted to be their friend, there is now a de facto alliance between the two countries.

There is nothing wrong in our president building alliances with our enemies to establish stability. Many before Obama advanced the notion of peace and order.

Reagan established order by reducing the powers of a degrading Soviet empire, which ended the Cold War to our advantage, and Nixon visited China in 1972 for better relations to contain Soviet encroachments in Eastern Europe. Both presidents had one central goal: To defend our interests from the aggression of other nations without losing sight of our power to shape the world. None would have put up with terror and invasions during negotiations with each other.

The White House is dressing its rapprochement with Iran as “negotiations” to contain, degrade, or eliminate the threat of a nuclear Iran (Which depends on the spin of the day). However, as Ledeen tells us in his article, Iran is invading other countries, committing crimes against humanity, and attacking our closest allies while Obama ignores all Iranian terror for the sake of a deal he is not sure of its success.

In other words, if the negotiations fail to produce a positive outcome for the US – we know how good a negotiator Obama is when he abandoned the defense shield in Poland without any – then the US interests in the Middle East become at the mercy of the Mullahs. Who is going to dislodge the Iranians occupying countries if Obama’s negotiations fail or turn badly for the US?

During the Reagan-Soviet negotiations and Nixon-China rapprochement, neither enemy took advantage of those discussions to invade or terrorize other countries. This is the difference between experienced political leaders who would not have put up with an overreaching foe and an inexperienced Senator surrounded by advisers as ignorant as they come.Obama is betting America’s interests in the Middle East in order to glorify his own presidency. It is truly insane.

Because of Obama’s reliance on the negotiations as the end of it all, he has become a proxy tool in the hands of Iran.

If Iran wants Obama to ignore the atrocities of Assad, then Obama will ignore them.

If Iran wants Obama to ignore the terror of Hamas, then Obama will ignore it.

If Iran wants Obama to fight ISIL on its behalf, then Obama will battle ISIL.

If Iran wants Obama not to supply the Free Syrian Army or the Kurds with weapons, then Obama will not supply them.

If Iran wants Obama to ignore the sectarian trespassing of al-Maliki, then Obama will ignore them.

Iran has realized quickly that its negotiations with the US are equivalent to renting a US president with all his powers free.

Why should Iran conclude these negotiations?

Assad Sitting Pretty Thanks to Our Stupidity
When Squeezed, Assad Yields Acid
A Golden Opportunity for US Intelligence to Squeeze Assad
Radicalism 567 Slippery Barack Obama 976