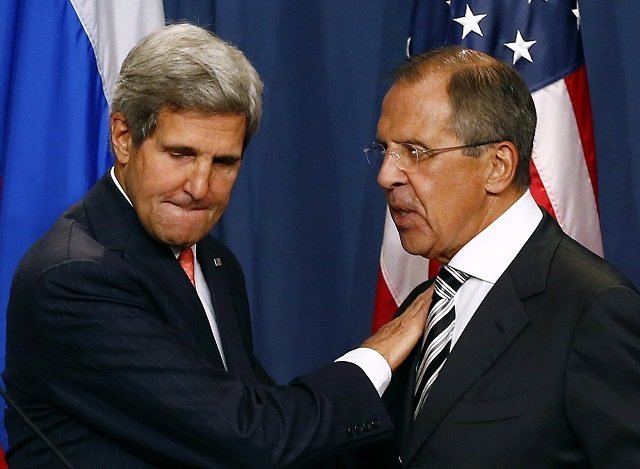 The article published below was written by Natasha Bertrand for the Business Insider. It demonstrates yet again why John Kerry is unfit to represent our great nation, Negotiating with John Kerry must be the most fulfilling job for Sergey Lavrov because every time Lavrov takes Kerry to the cleaners. In effect, John Kerry handed psychopath Assad a diplomatic victory.

As if Kerry decides whether Assad stays or not.

Those countries arming the rebels in Syria will ignore Kerry and Obama who, conspicuously, look more and more accommodating to Putin of Russia than to America interests. The weapons to the rebels will keep flowing whether Obama likes it or not and the Assad regime will keep fighting until its last soldier dies on the battlefields.

The absolute worst Secretary of State in the history of American politics is John Kerry. Instead of forcing the Russians to meet our demands, it is he who meets their demands at every turn and in every negotiations.

Good article by Ms. Bertrand below:

In a speech at the United States Institute of Peace on Thursday, Secretary of State John Kerry said that the US had been “building on common ground” with Russia and Iran at peace talks in Vienna over the conflict in Syria.

Kerry said the US remained firm in its opposition to a role for Syrian President Bashar Assad in the country’s future. But he noted that in the name of finding common ground, negotiators would be “leaving aside” the issue of his departure.

“We do not know for certain whether the kind of political transition we seek in that country can be achieved,” Kerry said.

As Middle East analyst Kyle W. Orton noted on Twitter, the fact that Assad’s future is not currently at the center of the discussion in Vienna is a “glaring red warning light” that the US and the Syrian opposition are about to be “taken to the cleaners.”

It makes sense that Kerry would want to avoid such a contentious topic at the talks: While the US, Saudi Arabia, and Turkey have long insisted on a fixed timeline for Assad’s departure, both Iran and Russia have vested interests in seeing the embattled leader remain in power.

Experts say, however, that a lasting peace in Syria cannot be achieved as long as Assad remains in power, because the war continues to be fueled, largely, by the brutality of his regime.

But that the terms of his departure have already been pushed aside at Vienna indicates that Iran and Russia may be outmaneuvering the US and its partners — already.

“We face an environment now that bears little resemblance to the kind of black-[and]-white scenarios that make decisions relatively easy,” Kerry said, tacitly acknowledging that the complexity of the conflict might require certain concessions.

“Put simply, there are bad guys all around and good guys who are not accustomed to working with each other.”

John Kerry has always been Assad’s best friend. He finally found a way to save the life of this mass murderer instead of working so hard to ship him to The Hague to answer for his crimes.

Shame on you John Kerry.