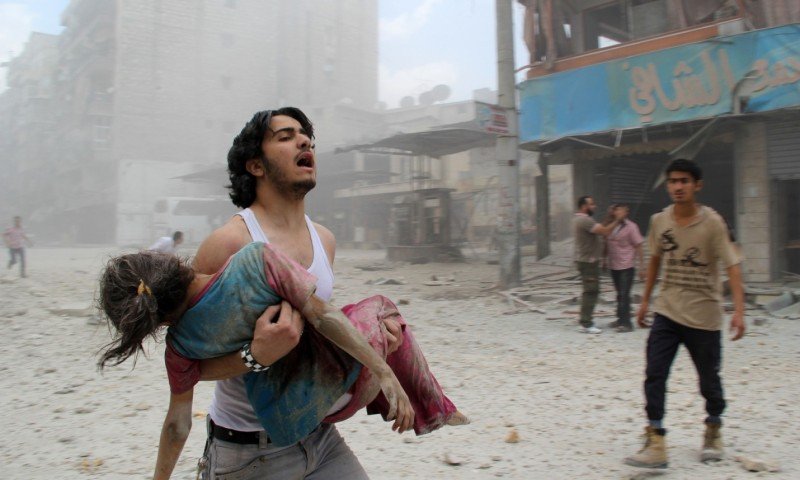 February 25, 2015 6:26 pm 0
Coordination Between Obama and Putin Is in Perfect Sync
The ISIS Syndrome: One Bad Policy, Two Bad Strategies
How Thick-Headed Assad Must Be

Assad used barrel bombs on hundreds of locations over the past year, despite a UN security council resolution condemning their use, a rights watchdog has said.

The use of the barrel bombs was documented in Aleppo and Daraa, two key battlegrounds in the civil war and the sites of recent regime offensives that attempted to turn the tide of the conflict but were beaten back by the opposition.

The documented use of barrel bombs contradicts statements made this month by Bashar al-Assad, who denied the use of the improvised bombs in an interview with the BBC.

Human Rights Watch said it used satellite imagery, witness statements and video and photographic evidence to identify at least 450 locations in rebel-held towns and villages in Daraa, and more than 1,000 in Aleppo, where the regime used large air-dropped munitions including the so-called barrel bombs and other conventional explosives.

“For a year, the security council has done nothing to stop Bashar al-Assad’s murderous air bombing campaign on rebel-held areas, which has terrorised, killed, and displaced civilians,” said Nadim Houry, deputy Middle East and North Africa director for HRW. “Amid talk of a possible temporary cessation of strikes on Aleppo, the question is whether Russia and China will finally allow the UN security council to impose sanctions to stop barrel bombs.”

The attacks documented by the group occurred between 22 February 2014 and 25 January 2015, the period since the passage of resolution 2139, which demanded the end of indiscriminate attacks on civilian areas by all parties in Syria, including the use of the barrel bombs – improvised explosives usually dropped from helicopters.

Doctors interviewed by the organisation were quoted as saying that the majority of the wounded taken to hospitals in Daraa and nearby Jordan were women and children.

The use of barrel bombs has been condemned under international law because the explosives are often pushed off planes or helicopters and cannot be used accurately to attack military targets.

“Al Assad! Or we set the country on fire!”
Investigate All of Imad Mustapha’s Activities
The New Ceiling: Military Intervention and Self-Defense
Assad Genocide 425