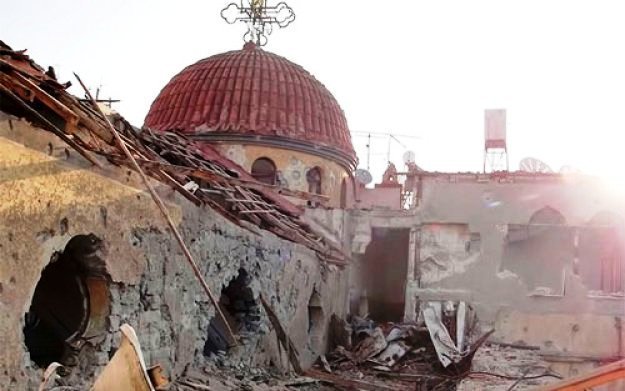 I dare you to defeat ISIS

February 26, 2015 4:24 am 0
From Obama Horse Manure to Obama Horse Panic
Al-Qaeda Would Rule Syria
Save the Christians

On February 24, Human Rights Watch published a report it titled “Syria: New Spate of Barrel Bomb Attacks” in which it details the continued and inhumane use of barrel bombs by the Assad regime against its own civilian population.

Many would read this report and would just shrug their shoulders. Violence is everywhere after all. But if you are a Christian concerned about ISIS or if you are an Israeli concerned about extremism, then I ask you to understand the importance of barrel bombs and why Assad continues to use them as a strategic weapon to cause ISIS to respond in kind.

Everyone knows that the Christians of Syria are fighting side-by-side with the Assad regime. In fact, those dispatching the barrel bombs may very well be Alawites, Christians, or Shia members of the regime, which in effect paint these minorities as the savages behind the barrel bomb campaigns killing Sunni women and children. The optics are bad from the perspective of those living or fighting on the ground in Syria. What they see is not what we see.

Why would Assad continue to use this weapon when his enemies are the rebels represented by the mixture of extremists fighting his regime and the moderates left over from the Free Syrian Army? Why does Assad have to kill civilians? Because ISIS responds to these acts by kidnapping and killing Alawites, Christians, and Shia. The more attention ISIS garners, the less Iran and its nuclear ambitions do.

ISIS uses the barrel bombs on Social Media to recruit more fighters Assad can rest easy now it has become a western problem, not his at all. Assad is intentionally driving ISIS to commit atrocities with his barrel bombs aimed at Sunni children and women. What better way than to forget Iran just occupied Yemen? Who has time to condemn Iran with ISIS kidnapping Christians?

This is what Syrians and Sunni Muslims joining ISIS see. They see their mothers, sisters, and daughters being slaughtered with barrel bombs and they join ISIS to fight back. As such, I dare you to defeat ISIS as long as Assad remains in power.

From the perspective of the West, ISIS is more dangerous than Assad because its actions are direct and intentional against its interests. When it comes to Assad and his terror moves, the West becomes as blind as a bat. From the perspective of Israelis, ISIS is as dangerous as Assad is as long as he is glued to the Iranian regime like an infant is to his mother’s titty.

However, from the Sunni Arab and non-Arab perspective, Assad, Iran, and Hezbollah are the cause behind the atrocities committed in Syria. They see it as Shia massacring Sunnis. Since Sunni ISIS is the only one willing to curb the Shia appetite for terror, Sunnis join to avenge their faith. Had Obama struck the Assad regime as well as ISIS back in September 2014, the region would look quite different today. ISIS recruiting way down, and Assad unable to play Obama’s ignorance and naivete like a harp by continually feeding terror.

I dare you to defeat ISIS as long as Assad is in power pushing the minorities to use barrel bombs against Syrian civilians. Under the present U.S. administration, we have some really bad people running our foreign policy. For a deal with Iran, they are willing to bask the region in a 100-year old sectarian war.  This is how demented are the people responsible for our foreign policy.

As long as the barrel bombs keep dropping, ISIS will kidnap and kill any minority in Syria and Iraq. Time for the Christians caught in the middle to applaud Assad, their defender who is sacrificing them for his own lifeline and that of Iran.

Do not tell this to Bill O’Reilly who has given much airtime to ISIS terrorism but not one word about the deranged Assad strategy aimed at harming the Christians or Assad’s terror against innocent Muslim civilians.

I dare you to defeat ISIS