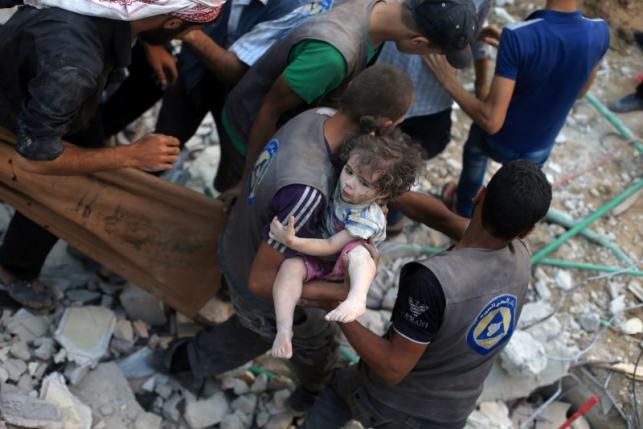 How Assad is Mocking Barack Obama and John Kerry

November 13, 2015 7:13 am 0
The Palestinian Grievance Industry
Gates and Panetta Critical of Obama on Syria
The “Fill the Blanks” President

The use of barrel bombs in Syria is killing innocent civilians by the thousands and also driving refugees towards Europe. Assad is using the weapons for dual purpose: Cleanse Sunni Muslims from Syria, and pressure Europe to engage with him as the ruler of Syria.

Instead of responding to his terror with military force that would curb his appetite for terrorizing the helpless Syrian civilians, John Kerry is on a journey of begging Assad to restrain himself knowing well diplomacy and savagery are incompatible.

The latest signs for how Assad is mocking Barack Obama and John Kerry is the assurances he sent the U.N. that his regime is not engaged in the illegal use of barrel bombs.

The Assad regime sent a statement to United Nations mediator Staffan de Mistura on Monday stressing that “the Syrian Arab Army will never use arbitrary weapons in its continued efforts to combat terrorism and restore stability and security to Syria.”

In response, the U.S. Ambassador to the United Nations Samantha Power said:

“We have to take public pledges with a grain of salt, There were nearly 1,500 barrel bomb attacks in October.”

While the feckless and unfit Secretary of State John Kerry scurries around begging the Assad regime and his sponsors, this is how Assad is mocking Barack Obama and John Kerry as a result of the policy of “no use of force against the Assad regime.” Those barrel bombs will continue to drop killing thousands of Syrians and hundreds of thousands of them will be heading to Europe as a result.

A senior U.N. diplomat, speaking on condition of anonymity, said de Mistura appeared excited about the Syrian commitment when he briefed the Security Council on Tuesday ahead of a new round of ministerial talks in Vienna on Saturday aimed at ending the conflict.

“We have to be pretty skeptical,” the diplomat said of the statement.

Between the weak Kerry and the buffoon De Mistura, Assad is sitting pretty. A giant among mice.

Where does Russia stand on the issue? Here is another glimpse of how Assad is mocking Barack Obama and John Kerry.

Russian U.N. Ambassador Vitaly Churkin said Moscow was concerned about the indiscriminate use of force.

“Over the years we have been talking to the Syrians trying to persuade them to show maximum restraint to avoid if possible civilian casualties. The barrel bombs issue is also something we have been discussing with them.”

A third-rate dictator and mass murderer is toying with the great United States of America because we have a con man who has no balls sitting in the White House. He would rather be humiliated and mocked every day than take the steps necessary to protect America’s interests from a psychopath dictator.

434 days until America restores its dignity.

How Assad is Mocking Barack Obama and John Kerry