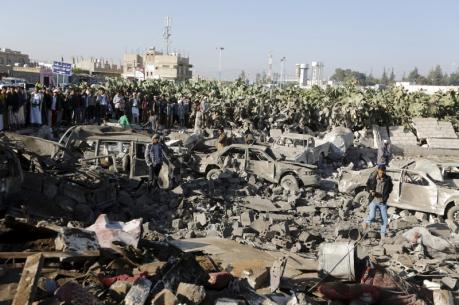 March 27, 2015 11:09 am 0
Syria rebels in south emerge as West’s last hope as moderates crushed elsewhere
Why moderate Muslims should NOT speak out
It is not about the Alawites of Syria, It is all about Assad

The ‘Decisive Storm Operation’ will not stop at Yemen now that the Arab countries have committed themselves fully to their own defense from Iranian domination. Next is the Assad regime Saudi Arabia knows it needs to remove from power to weaken Iran thoroughly. Without Assad, Iran shrinks back to its pre-Obama borders.

Assad knows it. He arranged to be interviewed by Charlie Rose on CBS in an attempt to pry open a dialogue with the U.S.

Good luck with that, mass murderer.

The surprise air strikes and sea lanes blockade the nine coalition countries have started against the Houthi terrorists in Yemen will have long-term positive impact upon the region. With Pakistani and Egyptian warships blocking any arms shipment to the Houthis, Yemen might be saved and Iranian influence extricated. Unless Iran decides to start a direct war with Pakistan and Egypt by attacking their warships. Expansionist Iran no more.

Saudi Ambassador to the U.S. Adel al-Jubair appeared on Fox News to make the case for his country’s defensive posture in Yemen. Saudi determination to see this campaign concluded to the advantages of the coalition cannot be underestimated.

With the exception of demanding halt to all military operations, Iran has been quite mum so far. No indication yet whether it intends to up the ante by committing its own military assets to defend the Houthis who must be by now concerned about the coalition’s next military move. Iran must decide whether it wants to wage a war against nine coalition countries in addition to Turkey, which committed yesterday to participating in the ‘Decisive Storm Operation’. One of those countries is a nuclear power with a massive army.

For the first time in almost seven years, when Obama let loose the Mullahs upon the region, Iran finds itself confronting a major dilemma. If it abandons the Houthis, the Mullahs will lose all credibility and if Iran confronts the coalition, it is risking an open and savage war on multi-fronts it cannot possibly win. In Chess, that’s a Queen’s Gambit opening Iran did not anticipate.

If I had to guess, Saudi Arabia has been planning defending Yemen from the Houthis ever since it refused to decrease its oil production back in July of 2014. Low oil prices place a heavy burden on the Iranian economy, which must have been part of the Saudi calculation to avert an all out war by Iran against the coalition.

For the time being, the region can begin to breathe a bit easier as expansionist Iran is no more. Iran will accelerate its meddling in Bahrain and Saudi Arabia to divert the attention away but I cannot imagine both countries are not well-prepared for that eventuality. The proxy tricks up Iran’s sleeves are getting old and predictable.

The international support for this air campaign against the Houthis has been overwhelming. With the exception of Iran and Russia’s Putin demanding halt to the military operations, all other countries are acquiescing through their deafening silence. As Iran proxies the Houthis, Iran is a proxy to Putin who is looking to pave the way for new Russian influence in the region.

Defeating the terrorist Houthis through an air campaign may be impossible. Ground troops will have to be deployed at one point for Riyadh to secure a victory; however, between mountainous terrain, inherent counterinsurgency weakness, and mercurial tribal loyalties and rivalries, ground forces will face daunting tasks if Saudi Arabia decides to use them.

There is no easy scenario to end this war if Saudi Arabia does not infiltrate the pro-Houthi Saleh camp and wreaks havoc in its ranks while it plays hide and seek with the Houthis. Remember the dummy, fully-equipped air fields the allied forces deployed in southern Britain to throw Hitler off the scent of a Normandie invasion? Saudi Arabia may have to use similar ploys with its ground forces to concentrate the Houthis defenses for better air strike hunting.