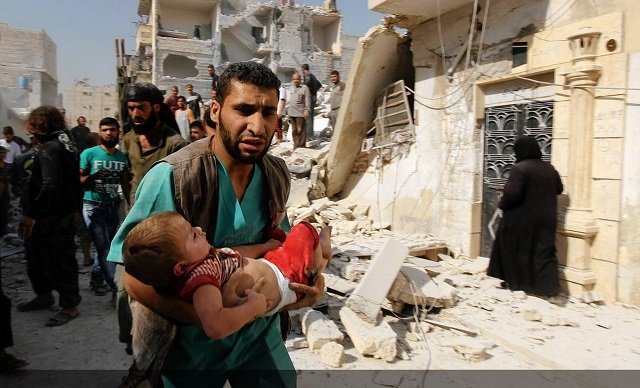 The Alawites should invite the US to strike Assad

September 3, 2013 9:32 am 0
More Like a Genocide than a Civil War
Clashes Erupted in Latakia Between Two Powerful Families
Assad Using Cluster Bombs Against Civilians

To those questioning the reasons behind punishing Assad for use of WMD against civilians, allow us to revitalize your memory over why this step is not a choice but an imperative.

To start, the region is the birthplace of the major three religions embraced in many countries on all continents. That, in and by itself, should trigger the wisdom necessary to control all forms of WMD in the hands of lunatics like Assad.

Additionally, Arabs, whether recently or the distant past, have attacked each other or other peoples with WMD, which should be a clear sign that the violent men ruling the region do not exempt anyone. We, Arabs and Muslims, will use them again if the West does not draw a red line by striking Assad and eventually removing him from power. Assad forgot Saddam’s fate because he believed the West is too feckless to respond to his terror. Let us bury this notion forever to safeguard all children and women of the region.

Because of their past use, revenge anchors itself in our psyche and it becomes a matter of time before another WMD attack takes place. The same Sunni Muslims Assad attacked today may be already conspiring to wage their own attack one day and it behooves the Alawites and the Christians of Syria to permit the US to strike Assad for their own future benefit. Sunnis will think twice about revenge using WMD.

Assad’s hate of Sunni Muslims is new to the Assad family. His father kept his distance but respected the notion that his loyalists were represented by the spectrum of Syria’s ethnic and sectarian roots. Assad father forced all of his sons to marry into Sunni families to expunge the notion he is ruling based on sectarianism. Assad son blew his father’s legacy to smithereens when he gassed the Sunnis of Syria and invited Iran into Syria’s living rooms. We attribute this hate to the Iranian regime. Since Baschar al-Assad has made Iran his absolute master, the hate, since 2003, has manifested itself in a variety of forms and culminated in the August 21 ghastly attack.

No one should under estimate the dangers of a Middle Eastern leader whose hate is sectarian.

The international community must find a compelling answer to rogue countries, like Syria and Iran, who refuse to sign and abide by international treaties governing WMD. The whole premise behind the religious fervor of the Iranian regime can be attributed to sparking Armageddon in the region for the 12th Imam to rise. Therefore, it is no longer enough to accept the status quo of letting rogue countries build their arsenal in the hope our diplomacy will prevent their use. If Russia and China refuse to accept this new premise, then the West must consider all options, to include economic pressures, to compel a responsible behavior.

When Putin ignores Assad’s atrocities, Putin is as much a thug as Assad is.

The hate prevalent between Sunnis and Shiites, as well as Muslims against Jews and Christians, is too deep to be resolved through treaties or diplomacy. We can only limit the risks by making sure that Syria and Iran will never have access to WMD again to be followed by North Korea governed by another lunatic. This should be number one issue in every G-8 summit until the world can find its peace of mind.

As far as Syria is concerned, the New Syria that may be dawning after the fall of Assad has to relinquish all WMD by inviting the international community to verify disposal and destruction. The New Syria cannot afford to let these weapons be used against our people or any other and we invite the Syrian opposition to make an official statement in this regard to appease the concerns of the Syrian people and that of a nervous international community.

We will never free Syria until we free ourselves from hate and destruction.

The Alawites should invite the US to strike Assad