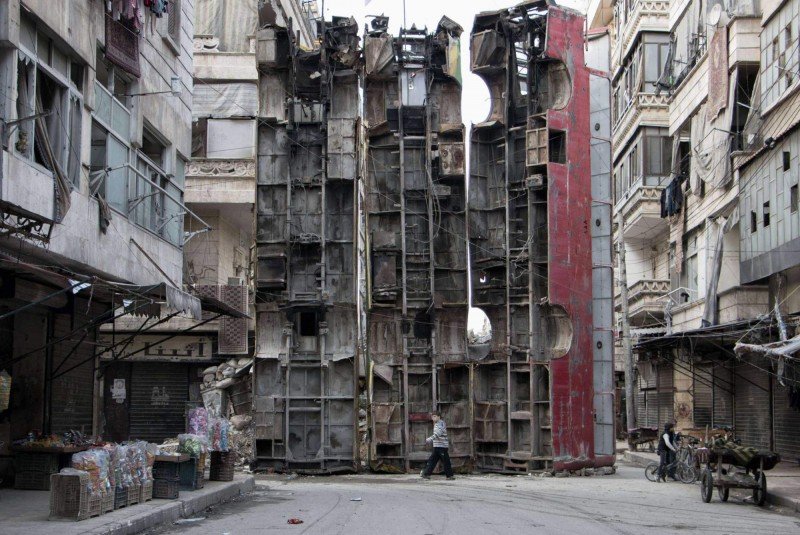 Surprising Way Some Syrians Are Protecting Themselves From Snipers

Source: TIME Magazine – Olivier Laurent – This is the Surprising Way Some Syrians Are Protecting Themselves From Snipers

Some buses in Aleppo, Syria, have been reconverted to serve as protection from snipers loyal to the country’s embattled Bashar Assad.

This photo, taken in the rebel-controlled Bustan al-Qasr neighborhood on March 14, is by Karam Al-Masri, a young Syrian who became a photographer following the uprising in his country that has now spilled into four years of civil war. “I wasn’t a photographer before,” he tells TIME. “But I started to cover the events to show what is going on in my country.”

“The Ahrar al-Sham brigade [a group that adheres to the conservative Salafi interpretation of Sunni Islam] placed the buses in such a way,” he says. “They used ropes, pulleys and a number of men to get the buses in such position. They are [blocking] the view of regime snipers.”

These upended buses are now a common sight in Aleppo, says Al-Masri, with several neighborhoods using the crude set-up to bring back a fragile sense of security to a city divided between forces loyal to the government and a slew of disparate insurgent groups.

The Next Breeding Ground for Global Jihad
Syria’s humanitarian blackmail is a war crime, and its victims need our help
The Carnage of Barrel Bombs in Syria
Syria News 1213 Syrian Revolution 1335