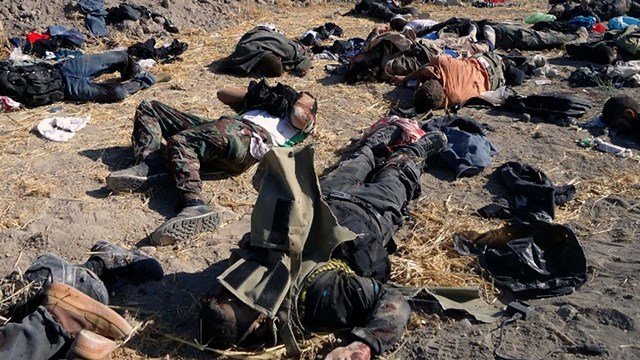 Assad is responsible for the carnage in Syria

July 29, 2013 10:11 am 0
Assad behind killing James Foley
US arms haven’t reached Syrian rebels
No Security For Assad When Rockets Land in Damascus

Source: The Washington Post – by William Harris (Assad is responsible for the carnage in Syria)

In late June, in the course of observing aid to refugees, I visited the Azaz displaced persons camp on the Syrian side of the Syrian-Turkish border. The sun-baked rows of tents march away in the dust. At 104 degrees in the shade, life’s fortunes are reduced to whether a tent happens to be in the shelter of an old concrete hangar. Here, thousands wait forlornly for the chance to enter Turkey.

The immensity of death, flight and destruction in Syria, with these refugees being among the more fortunate flotsam, has not been a natural catastrophe. The all-encompassing criminality of Syrian President Bashar al-Assad and the clique around him remain the central reality of the evolution in Syria since March 2011. Unfortunately, this truth has been obscured, even sidelined, by the standard “post-modern” impetus in the West to equalize parties to conflicts and to indulge virtually any self-serving narrative or conspiracy theory. The West can thereby walk away from what has become the crime of the 21st century.

Syrian regime criminality and responsibility have multiple dimensions, but three can serve as illustration. First, there was the regime’s initial determination to respond to unarmed protests with terror, torture and mass murder. According to none other than Russian President Vladimir Putin, speaking in June, “what is happening would not have happened” had Assad not spurned serious reform.

Second, having given the opposition no choice but armed resistance, the regime escalated the violence by using every level of heavy weaponry and did so for months, overwhelmingly against defenseless civilians. Indiscriminate government use of long-range ballistic missiles against its own people registered a historic first. Human rights organizations have consistently been unanimous about the regime’s unrelenting perpetration of war crimes and crimes against humanity. While misdeeds by jihadists and others — often atrocious — should not be excused, opposition war crimes have been of a far lesser scale.

Third, the regime has stoked the fires of radical Sunni Islamism. Of course jihadist sentiments already existed, and the Assad regime played its part before 2011 in manipulating them to trouble the divided neighboring societies of Lebanon and Iraq. Their inflation, however, relates above all to the regime’s military assaults in 2012 and 2013 that have pushed provincial, rural and suburban Sunni Arab Syrians to the wall. The jihadist absolutism that has metastasized across northern Syria reflects Assad’s brutalization of Syrians by almost every conceivable mode of abuse and violence, and it derives from the firestorm that he unleashed. That firestorm has attracted foreign fanatics. It is a pity that anyone in the West gives the time of day to the Syrian regime’s lying narrative that it is a defense against jihadism; few arsonists have ever paraded so impudently as firemen.

What of the opposition? On the one hand, these are dark days. The official coalition based in Turkey is torpid; jihadists have imposed religious courts in al-Raqqa, Aleppo and elsewhere; and fractiousness protrudes amid infrastructure collapse in areas liberated from the regime. Yet across Syria, opposition-armed elements with poor firepower and constricted supplies in shattered cities, suburbs and villages somehow sustain a viable resistance and mobilized manpower in excess of 100,000 — which would be impossible if they did not have the sympathy of the larger part of the population. A village protest slogan in Idlib province, reported in the international Arabic newspaper Asharq al-Awsat on July 13, declared that “we shall build the free Syrian state according to our will and we shall not import it from Tora Bora.” It expresses popular sentiments against Islamists, who would swiftly deflate in the transformed public atmosphere after a regime collapse. As regards Assad, millions of Syrians, including refugees, have not lost sight of the source of their calamities and what it would mean for their aspirations and human dignity to have his yoke reimposed.

As time has passed, responsibility for the ongoing devastation of Syria has become somewhat diffuse. Islamist financiers in Arab oil principalities buttress jihadists. Iran is determined to salvage Assad as a satrap, Persian-imperial-style. The West has sat by watching and left its friends to twist in the wind. Nothing, however, should blur the cardinal criminality of those who created the whole mess and who have been the engine of horror: Assad and his security apparatus.

The writer is a professor at the University of Otago in New Zealand. His most recent book is “Lebanon: A History, 600-2011.”

Assad is responsible for the carnage in Syria

The bastards are stoning our women
Bashar al-Assad is Syria’s problem, not its solution
Why the Syrian Opposition is in Turmoil
Syrian Revolution 1352