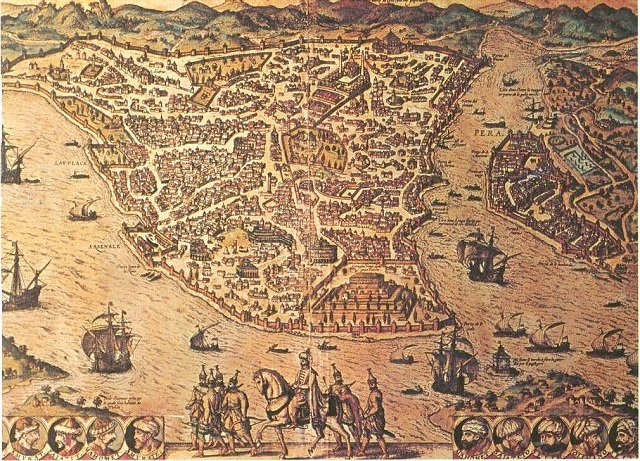 Once the capital of the Roman, the Byzantine, the Latin, and the Ottoman Empire, Constantinople fell to the Ottomans in 1453 and since has remained in the hands of modern Turkey.

The Greek Orthodox Church has lost many churches and properties over the years to a country that is over 99% Muslim. Constantinople was their jewel loss.

Early on when the Syrian opposition, led by the Muslim Brotherhood, made Istanbul (Constantinople) the main city for their meetings, it was not lost on The Phanar. Syria happens to be one of a handful of Arab countries where the Eastern Orthodox Church remains strong and prospering supported by the Assad regime. The favor is returned to Assad by the EOC.

One of the reasons why Russia stands behind Assad is due to the EOC’s support leading 75% of Russia’s population (According to a 2007 study by All-Russian Center for the Study of Public Opinion or VTsIOM).

The support is such that FM Lavrov of Russia is willing to use the suspicious testimony of a nun in Syria making claims the Syrian opposition gassed its own people. Here is how the New York Times described her:

“Mother Agnes, who had lived in Syria for years, has no expertise or training in chemical weapons forensics or filmmaking, and although she was in Damascus at the time of the attacks, she did not visit the sites or interview victims. Still, her assertions ”” she does not say which side made the videos ”” have significantly raised her once modest profile as the longtime superior of the Monastery of St. James the Mutilated, a Melkite Greek Catholic monastery in central Syria.

Now, she is lauded by supporters of Syria’s Bashar al-Assad, for championing narratives that resemble his own, and vilified by opposition activists who suspect the government supports her work as an unofficial ambassador.

International rights groups see Mr. Lavrov’s reference to the work of an untrained nun as a sign of desperation.”

We think those international rights groups are missing the big picture. Supporting Sister Agnes empowers Putin at home at a time when his policies are causing Russians to stir.

One can conclude that the civil war in Syria really has its roots in 1453 when the Ottomans dislodged the Church from its own territories in Constantinople and reduced its physical sphere of influence to 4,000 square meters of space. After losing big in Serbia when the Church supported Milosevic push for ethnic cleansing, EOC is not about to lose more churches and territories in Syria even if Assad gasses his people.

At the time of their support for Milosevic, the New York Times wrote:

“This is the church that 10 years ago welcomed Mr. Milosevic’s violent nationalist land grab in the collapsing Yugoslavia, the church whose most senior bishops traveled in the war zones of Croatia and Bosnia, blessing Serbian forces shelling towns like Sarajevo.”

The Syrian Sunnis fighting against Assad may have the support of 350 million Arab Sunnis, but Assad has the support of 300 million Christian Orthodox followers. Savagery or no savagery, the Eastern Orthodox Church is standing its grounds. After Chechnya comes Serbia and after Serbia comes Syria.

For the Church to believe that Assad’s alternative may not serve the Church’s interests is a barometer the Syrian opposition must heed. We believe the Orthodox Church sees the Saudi-led opposition as another Ottoman conquer.