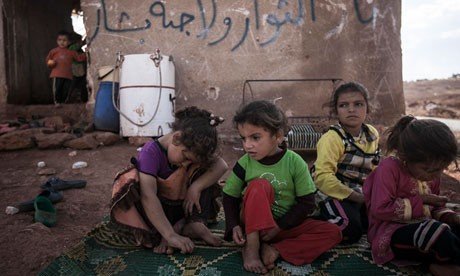 September 25, 2013 8:29 am 0
Now That Rebels Are Winning
Al Nusrah Front fights Iraqi militia in Aleppo
Massacre at a Bakery in Aleppo

Save the Children says conflict’s restriction on movement and huge inflation is causing severe food shortages.

Children in Syria are eating fruit, nuts and leaves and drinking dirty water to survive as families find it increasingly hard to feed themselves in a civil war that has left 100,000 people dead.

A report from Save the Children says restrictions on movement and massive inflation are severely limiting the ability of many Syrian families to put enough food on the table. Fighting has hindered access to humanitarian relief across many regions of the country.

“No one could come into our village with supplies and no civilians could escape,” Jamila, a grandmother living along the border, told the charity. “My son, in those four days underground, ate only half a piece of bread and drank only two glasses of water. We had a baby with us, my granddaughter, Safaa.

“My daughter wanted to stop breastfeeding her when she was a year old, but she would cry so loudly. We had seen before that when a baby cries, it attracts the attention of the armed men – they come to find the baby and kill the whole family … We were so afraid, every time she cried, my daughter quickly breastfed her, so she would not kill us all.”

Since fighting began in March 2011, more than 2 million Syrians have fled to neighbouring countries and a further 4 million have been internally displaced. A combined report from the UN and Syrian government published in June says at least 6.8 million Syrians require urgent humanitarian assistance, half of whom are children.

With the onset of winter, freezing temperatures and storms could bring further misery to traumatised families. Many of those who have fled are living in tents in refugee camps or in abandoned, makeshift buildings, leaving them vulnerable to harsh conditions. Last year, the region experienced its coldest winter in 20 years, which made living conditions especially difficult for those who had fled their homes and had left with just the clothes they were wearing.

According to Save the Children, Syrian parents cite lack of food as their second biggest source of stress, just behind the pervasive lack of security. Before the crisis, 10 million Syrians lived in rural areas, 80% of whom made a living from agriculture. The war, however, has heavily affected the sector, destroying or damaging agricultural machinery and storage facilities. With fighting in key food production areas such as those to the east of Aleppo, there is even less food.

Despite reasonably good rainfall levels, 2013 was the worst harvest since a severe drought nearly 30 years ago. In some areas, half the bakeries have been put out of action by the conflict. Food stocks are running out; what is left is rationed over months – or ransacked in minutes. Relief workers say there are indications that children in some areas, such as rural Damascus, are facing malnutrition.

With food so scarce and expensive, half of an average family’s expenditure is going on basic food. This was proving unsustainable, said Save the Children, leading to destitution and debt, or even the inability to feed children.

“We’ve never experienced a food shortage like this,” a mother named Roula said. “We would feed the children anything we could find – leaves, nuts, fruits – just to fill up their bellies. I had to give my whole family dirty water to drink. Because of that they got sick and suffered from terrible diarrhoea; they became dehydrated and weak. When we left our village and were on the road there was no food or water at all. I fed my children raw potatoes that we found. There was no water to cook them in, and we couldn’t light a fire because we might be seen and shot or shelled.”

On Monday, the UK launched a £30m initiative to provide desperately needed help including trauma counselling and education for Syria’s displaced children. Britain’s international development secretary, Justine Greening, said: “Syria’s children are becoming a lost generation. While British children have been starting a new school year following a summer break, these Syrian children have often been through a living hell.

“They are homeless, destitute and feel totally unsettled in their unfamiliar surroundings. Every bit of normality has been ripped away from these children at an age when feeling safe and secure really matters. They have seen their parents distraught and they are often very scared about what will happen next. They miss their friends from home.

“Many are deeply traumatised after witnessing scenes of horrifying brutality and finding themselves in terrifying situations when they are too young to really understand what is happening. Our help for what is becoming a lost generation will provide trauma care and counselling for those children who need it and basic educational supplies to try to bring some sense of normality back into their lives.

“We will also provide child support services in refugee camps and hand out some basic toys and crayons to children who have had to leave so much behind.”

The UN last week said more than 4,000 Syrian children had crossed borders into neighbouring countries without parents or adult relatives. Unicef, the UN agency for children, warned that without the protection of guardians they remained highly vulnerable to exploitation and abuse.

Of the 4,150 Syrian children identified and registered, at least 1,698 are in Lebanon, where many end up being used for agricultural child labour in the Bekaa valley area, according to Unicef.