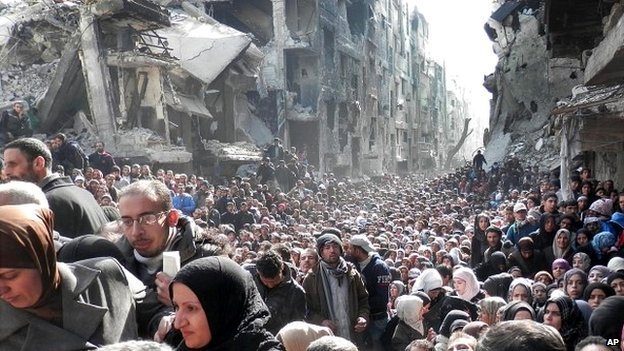 It is not about domestic terror, it is about international terror

There is no difference between the terror of Assad and the terror of ISIL. While America must always be prepared, it is not about domestic terror, it is about international terror, which usually comes home to harm us.

If ISIL had as much time as Assad had during the last three and half years of killing Syrians, ISIL would have killed as many Syrians and Iraqis.

If ISIL possessed Chemical Weapons, ISIL would not have hesitated to use them the way Assad did to kill Syrians.

If ISIL had its own prison system to torture the minorities, it would not have hesitated to torture them the way Assad tortured and executed Syrians.

There is strong evidence pointing the finger at Assad for holding James Foley as a prisoner and then delivering him to ISIL knowing well ISIL would behead Foley, so while ISIL had the knife, Assad sharpened it to carry out its terror.

If both are as deadly and as barbaric, why are we attacking ISIL, and not attacking Assad?

Because the real difference between both terrorist outfits is the geography, the targets, and the flexibility (GTF).

Assad recruited domestically from the ready supply of his supporters in Syria.

ISIL recruited internationally from 74 different countries, which became its Achilles’ heel because the West felt threatened by some 3,000 returning ISIL fighters who would have been spiritually hardened and religiously spiteful.

The Muslim Brotherhood is the only extremist Muslim organization that gave the impression it is a moderate group and when given the opportunity to rule did not hesitate to invoke Jihad against the Israelis the way al-Qaeda did. Justifiably, there is little sympathy for any Islamic group no matter their language. This is a relief to all the moderate Muslims because this chapter is closed for good.

Therefore, in reality, it is not about domestic terror, it is about international terror affecting GTF (geography, targets, and flexibility).

We can call everyone a terrorist in the Middle East, but the truth is only the terror that touches us here in America or in Europe is the terror that matters. The rest we lip service in corridors of power to show our hollow concerns.

Assad killing the Christians of Lebanon and massacring his own people matters little.

This is all considered domestic terror, and therefore an acceptable terror.

Because Israel is a strong nation, it can defend itself against domestic and regional terror, but what a poor Syrian mother to do against the terror of Assad.

The world has changed little since WWII because you would think the guilt caused by the immorality of 6 million Jews die needlessly would have caused civilized nations to steer away from making the same mistake.

Unfortunately, we all forgot our history.

And even more unfortunately, this is why nations in the Middle East will always pursue nuclear weapons. They never want to rely on us in the West for their survival.

It is not about domestic terror, it is about international terror