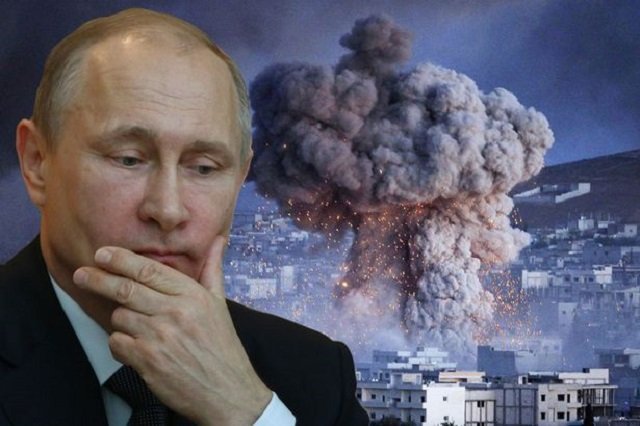 Why World Leaders Are Silent When Putin Commits Atrocities?

January 28, 2016 5:05 pm 0
Putin Is Destroying My Dream of Returning to a Free Syria
The Dead Horse Khamenei and Putin Still Favor
Putin Is Killing Syria Civilians to Control Europe

Here are two articles by top media organizations that illustrate a strange phenomenon: Why world leaders are silent when Putin commits atrocities?

The first was published by The Telegraph of London. The article begins:

Russian warplanes severely damaged a British-funded bakery in northern Syria a few hours before the facility was due to start providing food for 18,000 people.

Hundreds of civilians have been killed by Russian air strikes since the onset of the Kremlin’s intervention on Sept 30. The targets of Russian bombs have included mosques, field hospitals and schools – all of which should enjoy protection under international humanitarian law.

Did you see David Cameron stand-up to accuse Vladimir Putin of war crimes? Or anyone in the British Government? Their silence makes the British look like they are playing a part in the starvation of Syrian civilians. Why the silence? Is it because Putin is doing them all a favor by bombing once in a while some ISIS positions? What does it matter if along the way he starves and kills women and children, right?

AFP, the venerable French news agency, published its own account of the death of civilians:

Suspected Russian air strikes killed at least 54 civilians in rebel- and jihadist-held areas of Syria in the past 24 hours, a monitoring group said Thursday.

Innocent Syrian civilians are neither Jihadists, nor terrorists. They are just civilians. People who are struggling to survive the worst war in the 21st century so far. So, explain something to us. Why world leaders are silent when Putin commits atrocities? Do you think they send him congratulatory notes of how good a job he has done? Because their silence makes no sense at all.

The worst of the bunch is Barack Obama. The most selfish human being that ever occupied the White House. He has turned his back on the Syrian people as if Syrians had talked his father and mother into abandoning his sorry ass.

What about Ban Ki-moon? Where is his outrage at Russia for deliberately killing Syrian civilians? Did he think the world is just not paying too much attention, or did he think it is not his job to point the finger at countries in his organization that are run by criminals?

There is a certain moral depravity prevailing among Western leaders with regard to Russia committing crimes against humanity when it permits real Russian terrorists to kill real Syrian innocent women and children using the deadliest weapons invented by humankind.

Unless, of course, this is the aim all along because it feeds into the industry of terror now employing millions of people around the world, permitting Western leaders to raise taxes easily, expanding domestic surveillance to monitor everyone without accountability, and growing their governments to sizes only fear from terror could afford them.

If Russia kills and starves civilians like Assad does, more jihadists would join the war in Syria coming from the all over the world, which plays into the rhetoric of bigger budgets, more weapons, more taxes to fight terror. They all said Assad is a magnet for terror, yet he remains in power. Wonder why.

In effect, killing, burning, and starving the Syrian people is like fuel to the Western terror industry. It’s not ovens exactly, but close enough.

Why World Leaders Are Silent When Putin Commits Atrocities?