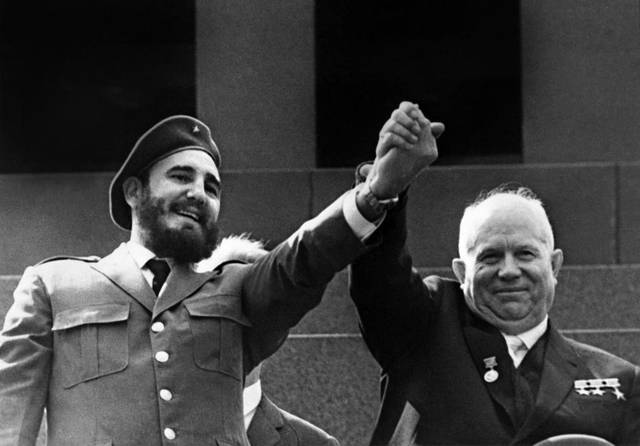 What If Putin Has Installed Nuclear Warheads in Syria?

There are those analysts and observers who are watching the war in Syria and who, deliberately, take the side of the loser; except if those losing are Sunni extremists whose savagery against the West is well documented. In other words, they cheer for Putin to win the war for Assad and they will deal with Iran in due time. To those, we say, be careful what you wish for in Putin winning in Syria. What if Putin has installed nuclear warheads in Syria today the way Khrushchev tried to install them in Cuba to fully control the region and its oil supplies? Do you think Obama would tell us? Don’t make us laugh.

By entering the Syrian war, next to a NATO country, with the full acquiescence of an anti-American US president, Russia has achieved what the Soviets could not in 40 years of Cold War. In terms of equivalency, Russia in Syria is comparable to president John F. Kennedy losing to Nikita Khrushchev the Cuban missile stare down. If Russia slips-in, secretly, few nuclear warheads into Syria as a warning to all parties, who will stop Putin? Russia armed with nuclear heads in Syria means it controls the whole region. Period. And Putin won’t miss this chance. The power leap for Russia would be monumental with all its problems solved.

When dangers stack-up against a country, how to confront which danger first becomes a difficult strategic decision. Do we confront numerous Sunni jihadists in Syria armed with Kalashnikovs, or do we confront Iran and Hezbollah armed with missiles along with the possibility of a nuclear Syria? Be careful what you wish for in Putin winning in Syria. What if Putin has installed nuclear warheads in Syria to control the source of Sunni radicalism and its oil supplies?

In reality, Sunni extremists, like ISIS and al-Qaeda, no matter their danger, will always face Sunni Arab countries who view them as big a danger to their rule as Iran is. But who will confront a stronger Iran other than little Israel and weakened Gulf countries if Putin secures Syria for Assad? Who will confront a Russian nuclear presence in Syria? NATO matters little after Obama stripped it of its powers to monitor Putin’s danger. If you say any of the Republican candidates, with the exception of Jeb Bush, don’t count on it. This new non-interventionist trend we see in America today runs deep and wide. Any future US President, burdened by almost 19 trillion in debt, would have to calculate all the risks inherent in confronting Iranian terror in the Middle East with Russian nuclear heads standing guard in Syria.

This begs the question then. Are we relying on Putin to protect and secure Israel from the crazy Mullahs in Iran? Should Israel put its trust in Russia the way it trusted America just because Russia is out to destroy Sunni Islamism but not the more dangerous Shiite Mullahs? Did Putin promise he would control the Mullahs’ violent appetite against Israel? If so, will the Mullahs forget their sacrifices in Syria to please Russia and give Israel a pass? Bet on this last question at your own peril.

The safety of our allies, be it Israel or Saudi Arabia, rests on juggling between a more dangerous Iranian terror Putin is protecting or Sunni Islamist extremist groups most, if not all, Arab Sunni countries would spring to battle at a moment’s notice. Protecting Assad is doomed to create larger problems, especially if we misread or trust Vladimir Putin the way Europe misread and trusted Hitler prior to WWII.

Bet on the Islamists, even though their danger cannot be underestimated, because if Putin wins the war in Syria, assessing the danger of what might happen or who are our allies would become far more complicated to leave to chance. If Putin introduces nuclear weapons to Syria the way Khrushchev tried to introduce them in Cuba, then kiss stability and order good bye and welcome a $300 a barrel of oil with Putin blocking Saudi Arabia from exporting any. You think Putin would not dare?

Constantinople would be avenged some 600 years later.

Finally, why is Obama silent about Russian military Syrian presence? What if Putin has installed nuclear warheads in Syria with Obama’s nod? America would never be able to go back to fight another war in the region, which suits Obama fine. Hand the Russians the region and extricate America completely. What does Obama get in return? Could he have struck an agreement with Putin for another sinister plan involving Israel in return for control of the region? Have we not learned enough about this president to know that after every move he makes or does not, there is some ugly plan of his being hatched, which inevitably has one goal: to harm US allies, especially Israel?

Be careful what you wish for in Putin winning in Syria. Obama may be lurking in the shadows for his final blow in return for Putin’s control of the Middle East. If Assad loses, then we can all deal with those crazy Sunni extremists brandishing AK-47’s instead of missiles. But if he wins, expect hell to show up at your doorsteps.

What If Putin Has Installed Nuclear Warheads in Syria?