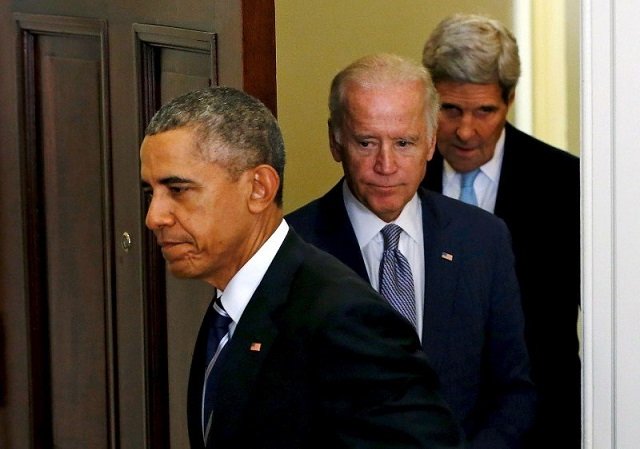 Source: Business Insider – by Natasha Bertrand (The one line the West keeps repeating about Syria that is helping Assad win the war)

In a Washington press conference shortly after peace talks over Syria’s future fell apart earlier this week, US Secretary of State John Kerry again called on Syria’s government and its supporters to end their military campaign and pursue a political solution to the conflict instead.

Days earlier, Gareth Bayley, the UK’s special representative for Syria, told reporters in Geneva that “there is no military solution” to the conflict.

As the diplomats called for a peaceful resolution to the crisis, however, pro-regime forces were encircling Aleppo — Syria’s largest city — aided by heavy Russian airstrikes that are estimated to have killed scores of civilians.

Some experts now say the line often repeated by Kerry and many of his western counterparts — that there is “no military solution” to the crisis in Syria — has actually allowed Syrian  [psychopath] Bashar al-Assad and his allies to pursue such a military solution with impunity.

“Moscow has used its ‘co-convener’ status of the Vienna peace process (which mandated the Geneva conference) as a cover to distract and occupy Washington and the West,” Fred Hof, a senior fellow at the Atlantic Council’s Rafik Hariri Center for the Middle East and former adviser on Syria under the Obama administration, wrote on Thursday.

That, Hof continued, has allowed Russia to pursue its own “political-military objective: neutralizing the armed nationalist opposition to create for the West — for Washington in particular — the horror of a binary choice between Bashar the Barrel Bomber and Baghdadi the False Caliph.”

He was referring to Abu Bakr al-Baghdadi, the leader of the terrorist organization ISIS.

Analysts generally agree that any attempt to pursue a political solution while the Assad regime, Russia, and Iran pursue a military campaign is doomed for failure.

But the Obama administration has so far failed to put adequate pressure on the Syrian government to stop its aerial bombardments and sieges of rebel-held areas. Those, incidentally, were two of the opposition’s conditions that, because they were not met, compelled them to walk away from negotiations last week.

“It will take Russian and Iranian pressure for the regime to negotiate in good faith with the opposition,” Hof said in an email to Business Insider. “But Russia and Iran both want Assad to prevail militarily against the nationalist opposition.”

He added: “The Assad regime, being borne aloft militarily at the moment by Iran and Russia, is not very interested. Kerry is trying hard to talk them out of this. But each is interested in forcing the West into a binary choice between Assad the Barrel Bomber and Baghdadi, the ISIS ‘caliph.’ And both are confident that the West – led by the US – will reconcile with their guy, Assad, if Baghdadi is the only alternative.”

Jeff White, a defense analyst at the Washington Institute for Near East Policy, said that while Russia, Iran, and Assad are not interested in a political solution, pretending that they are while pursuing military objectives on the ground has come to form the core of their war strategy.

“The regime and allies are in it to win, not to negotiate a ‘transition,'” White said in an email to Business Insider last week. “Negotiations and fighting are related parts of their war strategy.”

He added: “The war will keep going until the regime prevails, increasingly likely, or Assad’s allies abandon him, unlikely for the foreseeable future.”

It is especially unlikely, given the Assad regime’s recent battlefield victories.

Government troops, accompanied by Iran-backed Shiite militias and Hezbollah forces, reached the cities of Nubl and Zahraa outside of Aleppo last week. As such, the regime “succeed[ed] in a few days in what it had failed to do for over three years” thanks to heavy Russian air support, according to an Atlantic Council analysis by Faysal Itani and Hossam Abouzahr.

The offensive, moreover, was a huge blow to Turkey — a staunch opponent of Assad — as it effectively cut off Ankara’s supply line to the rebels it had been supporting in Aleppo.

“Mr. Putin is treating Geneva as a smokescreen behind which to keep up his offensive,” the editorial board wrote. “Instead of bullying rebels to attend the talks, the US and its allies should back their demand that Russia and the regime cease bombing the Syrian people. Geneva will otherwise be the venue for a third failure to end this pitiless war.”