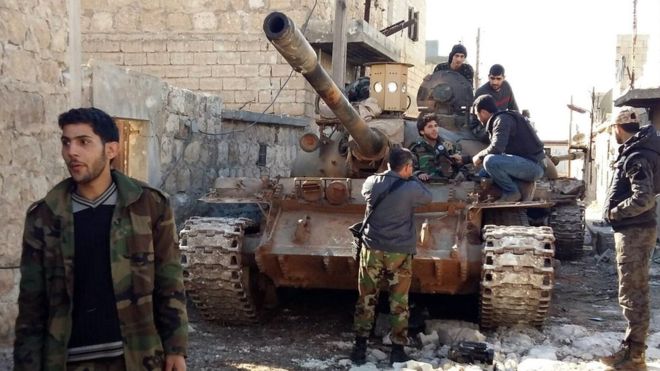 February 4, 2016 8:38 am 0
Syrian jihadists wreak havoc as violence spreads into Iraq
The worst place in the world? Aleppo in ruins after four years of Syria war
You Want alQaeda? You Got alQaeda

The Syrian Army has been trying, for over three years, to break through the Syrian rebel defenses around Aleppo. In three days, it achieved what it could not in 3 and a half years. With Obama’s secret help, Assad encircled Aleppo.

A Syrian army source said the city of Aleppo would soon be encircled by government forces as rebels pounded by Russian air strikes expressed hope that the failure of Geneva peace talks would encourage their foreign backers to send better weapons.

Turkey, a major sponsor of the insurgency against the psychopath Baschar al-Assad, said there was no point to peace talks while Russia carried out attacks in Syria. Moscow confirmed a Russian military trainer was killed in Syria this week, but denied that Russian servicemen were fighting on the ground.

Four months of Russian air strikes achieved little. However, in the past 10 days or so, the gains the Syrian army made on the ground became obviously too sudden and too quick as compared to the last four months. With Obama’s secret help, the Assad forces are advancing rapidly against the Syrian rebels.

With Obama’s secret help, the help of Russian air power and allies including Lebanon’s Hezbollah and Iranian fighters on the ground, the overstretched Syrian army is regaining ground on key fronts in the west, where Syria’s most important cities are located.

But vast swathes of the country are in the hands of armed rebels, including a mosaic of groups in the west, Islamic State in the east, and Kurdish militia in the north.

The refugee crisis created by the five-year-long war moved back into focus as donors convened in London on Thursday, with U.N. agencies seeking billions in aid to help the victims of a conflict that has forced millions from their homes.

Although on the surface, it looks like Washington and Moscow support two opposite sides in the five-year-old war, recently, though, Barack Obama has made it clear, in an apparent reversal, he stands for Assad, which may have prompted the US to share intelligence about the Syrian rebels that saw quick advances by the Syrian army the result of quick defeats by the rebels.

Aleppo, 50 km (30 miles) south of the Turkish border, is divided into areas of government and opposition control. Since the start of Russia’s bombing campaign, the army and its allies have launched major offensives to the south of the city against rebels, and to the east against Islamic State.

The army source said operations to fully encircle Aleppo from the west would happen soon. The army and its allies on Wednesday broke through rebel lines to the northwest of the city, reaching two Shi’ite towns loyal to the government for the first time in 3-1/2 years.

If the government regains control of Aleppo, it would be a big blow to insurgents’ hopes of toppling Assad after a war that has divided Syria between western areas mostly still governed from Damascus and much of the rest of the country held by armed groups.

Rebel commanders said they hoped the peace talks’ collapse would convince their foreign backers, states including Turkey and Saudi Arabia, that it was time to send them more powerful and advanced weapons, including anti-aircraft missiles.

Assad’s foreign opponents have been funnelling weapons to vetted rebel groups via both Turkey and Jordan.

One rebel leader said he expected “something new God willing” after the failure of the Geneva talks.

Another rebel commander said: “They are promising to continue the support. In what form, I don’t yet know … How it will crystallise, nobody knows … We need to wait.”

Both spoke on condition of anonymity citing the sensitivity of the issue.

If Saudi Arabia and Turkey fail to defeat the Assad regime, it will encourage Iran to open a new front, closer to home, against its nemesis possibly in Bahrain. Whether the Saudi leadership is cognizant of this danger is hard to say, but if the rebels do not receive considerable military support to reverse the trend, Barack Obama will defeat the Syrian people and the rebels in favor of a stronger and more dangerous Iran.

Obama’s bet on Iran is deeply rooted for his hate of all of the US traditional allies he is trying to crush.