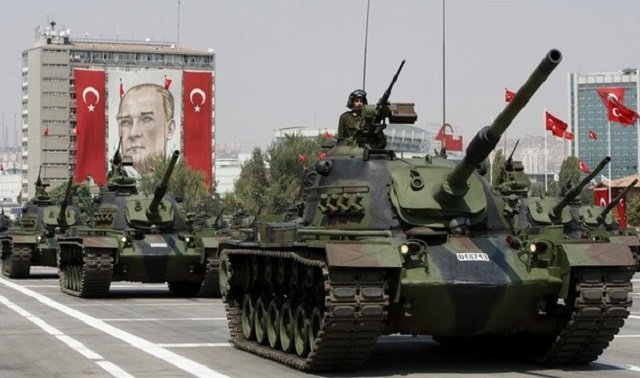 Will Turkey Commit its Ground Troops in Syria?

February 4, 2016 1:40 pm 0
Relatives of Syria’s Minister of Defense Fight for IRGC
The Games Nations Play
Nothing But The Truth Day

Russia said on Thursday it had serious grounds to suspect Turkey was preparing a military incursion in Syria as a Syrian army source said the city of Aleppo would soon be encircled by government forces that are advancing with Russian air support. Will Turkey commit its ground troops in Syria in support of the rebels the way Russia committed its military in support of Assad? Cost of such commitment would be paid for by the Gulf countries whose concerns over Russia helping Iran in the region has reached their red line.

Any Turkish incursion would be a major escalation in a war that has already drawn in neighboring, regional and international governments, and would risk direct confrontation between Russia and a NATO member.

Russia’s defense ministry said it had registered “a growing number of signs of hidden preparation of the Turkish Armed Forces for active actions on the territory of Syria”. There was no immediate comment from Turkey. Will Turkey commit its ground troops in Syria?

Turkish Prime Minister Ahmet Davutoglu said that after each discussion held between Washington and Moscow, Russia carried out even more attacks, which confirms that Barack Obama and Vladimir Putin are both coordinating to keep Assad in power, something the majority of the Syrian people will never accept.

Turkey, which has backed the Syrian rebellion, meanwhile called for the United States to take a more decisive stance against Russia over its intervention in Syria, and said there was no point to peace talks while Russia carried out attacks.

While the Syrian opposition has received U.S. aid during the conflict – including military support to vetted rebel factions – Assad’s opponents have been heavily critical of U.S. policy in recent weeks, accusing Washington of giving way to Russia.

Rebel commanders said they hoped the peace talks’ collapse would convince their foreign backers, including Saudi Arabia, that it was time to send them more powerful and advanced weapons, including anti-aircraft missiles.

Assad’s foreign opponents have been funneling weapons to vetted rebel groups via both Turkey and Jordan.

The refugee crisis created by the five-year-long war moved back into focus as donors convened in London on Thursday, with countries pledging billions of dollars in aid to help the victims of a conflict that has forced millions from their homes.

Turkey said at the conference up to 70,000 refugees from Aleppo were moving toward the border due to air strikes. Rebels meanwhile said they hoped the failure of peace talks would encourage their foreign sponsors to send them better weapons.

With the help of Russian air power and suspected intelligence Barack Obama is delivering on rebel movements and tactics, in addition to allies including Lebanon’s Hezbollah and Iranian fighters on the ground, the Syrian army is regaining areas on key fronts in the west, where Syria’s most important cities are located.

Will Turkey Commit its Ground Troops in Syria?