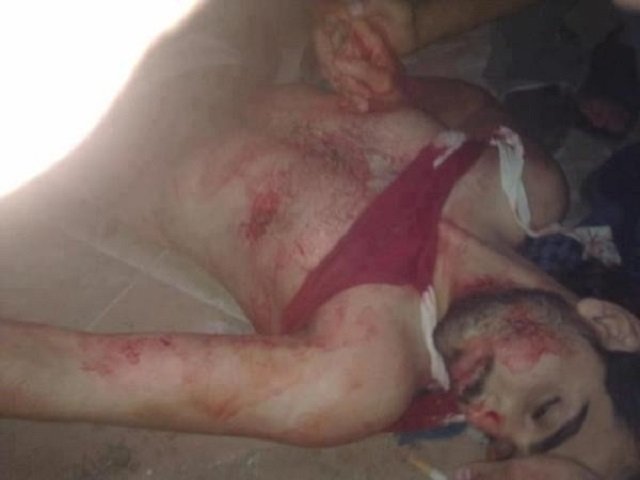 August 5, 2013 11:11 am 0
Half of Syria’s children are not in school, creating dire consequences for the future
Syria’s Aleppo Suffering Three-Week ‘Water Crisis’
Syrian jihadists wreak havoc as violence spreads into Iraq

Syria’s main opposition group on Sunday urged the United Nations to probe “numerous massacres” they say were committed by the psychopath Baschar al-Assad’s forces during the Muslim fasting month of Ramadan.

The National Coalition also said it was ready to cooperate in any independent investigation into alleged crimes committed by opposition forces.

“The Syrian Coalition urges… Pillay to immediately begin an investigation into the numerous massacres that have taken place during the holy month of Ramadan,” a statement said.

“Assad has violated international humanitarian and human rights laws. He has committed crimes against humanity by using ballistic missiles, toxic gas, fixed-wing aircraft and chemical weapons,” the group said in a statement.

“Assad’s forces have summarily executed civilians, burned them, and targeted towns, villages, schools, hospitals, shelters, and places of worship across Syria,” it added.

Pillay said on Friday that the events during fighting for control of the town of Khan al-Assal in Aleppo province were “deeply shocking”.

Video footage shot by rebels and information provided by the Syrian Observatory for Human Rights suggest dozens of members of regime forces were executed.

“There needs to be a thorough independent investigation to establish whether war crimes have been committed. And those responsible for such crimes should be brought to justice,” Pillay said.

“Opposition forces should not think they are immune from prosecution. They must adhere to their responsibilities under international law,” she added.

The opposition said it was ready to cooperate in any independent probe.

The Coalition “reiterates its full commitment to international conventions, emphasising that those who violate international human rights law must be brought to justice regardless of who they might be”, the statement said.

The group “further expresses its readiness to cooperate with all independent organisations to conduct impartial investigations into the war crimes committed across Syria.”

More than 100,000 people have been killed in Syria’s war, the UN says. Millions more have been forced by violence to flee their homes.