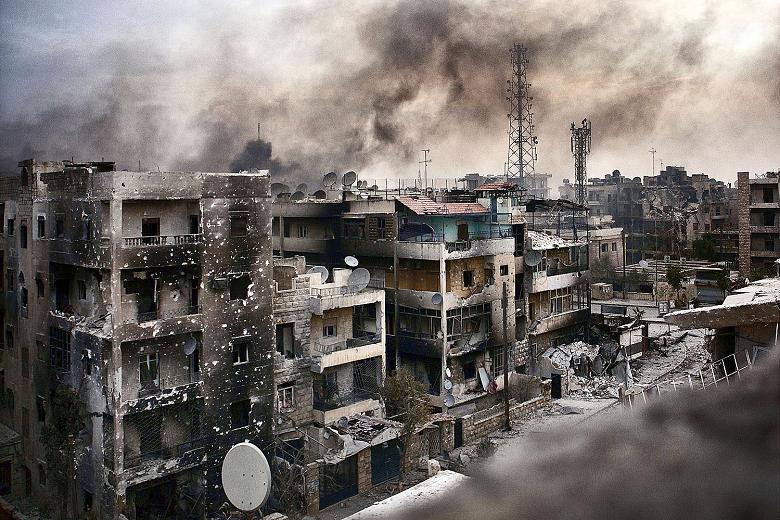 The worst place in the world? Aleppo in ruins after four years of Syria war

In the east of Syria’s largest city, where entire neighbourhoods have been destroyed, the few remaining residents face a Darwinian fight for survival

Aleppo had withstood more than six millennia of pillage and insurrection, but the past three years have damaged more of its civilisation and displaced more of its people than perhaps all its earlier conflicts.

The ancient metropolis, one of the oldest continually inhabited cities in the world, is now split into two halves: the Syrian regime runs the west and the armed opposition controls the east.

Western Aleppo has had by far the better of the war, with civic services still functioning in most neighbourhoods and war damage minimal. Much of the east, though, is ravaged and empty.

Whole neighbourhoods have been levelled by enormous explosions that have systematically targeted main roads around the city and all exits out of it, as well as marketplaces, hospitals, bread lines and fuel queues.

Those who remain in eastern Aleppo, roughly 40,000 from a prewar population estimated at about a million, have been without electricity or running water for more than a year.

Supplies of heating fuel were drastically short this winter and last, even with demand being markedly lower.

Almost all public parks have been stripped of trees, which were harvested for firewood. When there were no more trees, families begun cutting up school desks and chairs to stay warm. Comparisons with the siege of Leningrad are no exaggeration in a city that must be a strong contender for the worst place in the world.

Both winters, though, were mercifully short, a rare respite in an otherwise withering and relentless campaign that has transformed the modern face of Syria’s biggest city and left those who remain in a fight for survival.

The few locals who have stayed behind in Aleppo have moved close to its Old City, one of the few neighbourhoods where life is somehow grinding on. The Old City is close to the Citadel, which has soared from central Aleppo for several thousand years. It still stands erect, although rubble is piled all around its eastern side, much of the damage caused by giant tunnel bombs placed under regime positions, then detonated, destroying hotels, mosques and government buildings.

That damage, though, is dwarfed by the destruction on the city’s far eastern borders, where large improvised explosives dropped from helicopters have levelled entire suburbs.

About 40% of eastern Aleppo has been damaged, or destroyed. Civilians who haven’t made it to the relative safety of Turkey, or even the countryside between the city and the border, long ago left the fringes for squats closer to the centre of town.

There, they can find food – if they can afford it. Most forms of work stopped long ago here. Shops are closed in all but a few neighbourhoods, government offices are shuttered and all but subsistence commerce has ceased to exist.

So too has education. And healthcare has been pared back to the basics. In one of eastern Aleppo’s few functioning hospitals, Dr Omar al-Masri performs brain surgery without a CT scanner. Patients with open head wounds are routinely treated with minimal means to diagnose their problems. “It’s the same with all forms of advanced medicine here,” he said. “Pediatrics, obstetrics, trauma surgery. All of us are waiting to die. Not just the patients. The barrel bombs are targeting the hospital too.”

Medical supplies can make it into Aleppo, through a vital supply line over an open field to the north. The terrain from the northern fringes to the Turkish border is under opposition control, although the terror group Islamic State menaces the city and the countryside from the north-east. Food can also reach those who need it – and can afford to pay for it – either from Turkey, or through a series of roads to the regime-held south.

Poverty is an increasing blight on the last inhabitants of eastern Aleppo. Though community carers and opposition fighters try to provide for the residents they protect, some families are slipping through the cracks.

Aleppo’s civilian guard has regularly found families trapped in their homes days after after bombs have hit nearby. As other families had left their area, there had been no one to hear their cries.

“So far the city has stood up to the most brutal of sieges,” said Khaled Midan, who left for Turkey in January and is staying with his wife and children in a flat near the border. “We left because psychologically the children could not stand it any more. They hated the helicopters. They couldn’t sleep. They were traumatised and terrified and that isn’t life.”

Midan said Aleppo was now on its knees, although its remaining citizens were heartened that attempts to besiege them in February had failed. “People can still come and go. They can still eat. But they can’t pay for the basics of life for much longer. They need help.”

The worst place in the world? Aleppo in ruins after four years of Syria war