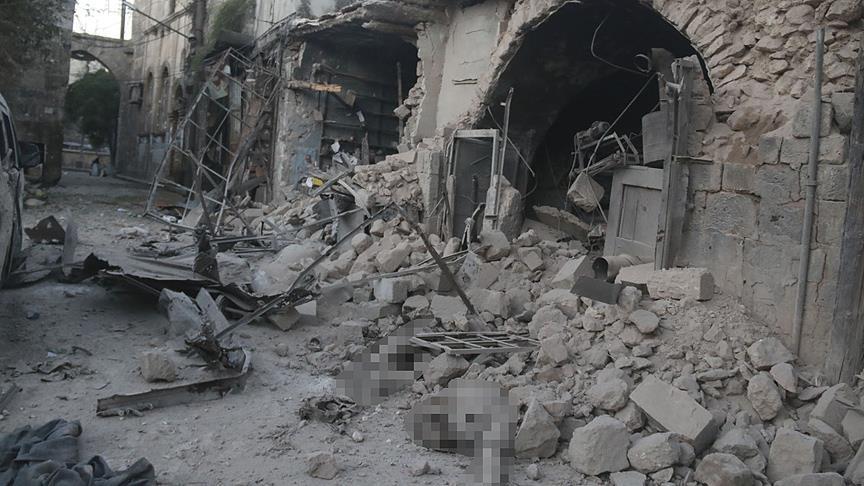 Massacre at a Bakery in Aleppo

The terror of the Assad regime has once again struck with impunity. Assad knows no boundaries, refutes charity, and adopts death as a mean to resolve his problems. History is witnessing the outing of a global monster on a scale to strike fear into all humanity. The massacre at a bakery in Aleppo on October 23 demonstrates amply how justifies is our labeling.

In Aleppo, the largest city in Syria, Assad targeted a bakery delivering much needed bread for starving families. His armies shelled it with heavy artillery, which ended killing some 30 Syrians and injuring over a hundred. Assad armies waited until the bakery was full of people before it shelled it.

Watch for yourself the carnage it caused. Please do not watch the video if you don’t have the stomach to see people suffer.

The disturbing video shows body parts strewn on the ground, and cars rushing through the smell of death to carry the injured to safer areas. This is one incident among many to highlight the crimes against humanity Assad is perpetrating with total impunity.

In the meanwhile, President Obama believes this is none of our business. That America’s role as protector of human rights has been decimated in Iraq. Did we run after Vietnam? Did we hide from our enemies? Or did America recoil in fear?

This President is attempting to re-write America’s role and duties to become just another nation among nations. Not the super champion this land of liberty has always played in our short history. We ignored the Bolsheviks in 1917, which dragged this country into a protracted war against communism that literally landed on our door steps.

Had we not learned from 9/11 that ignoring threats will not diminish their resolve? We are ignoring the threat of Assad in the hope he will forget about us. Did Iran forget us since 1979?

Massacre at a Bakery in Aleppo