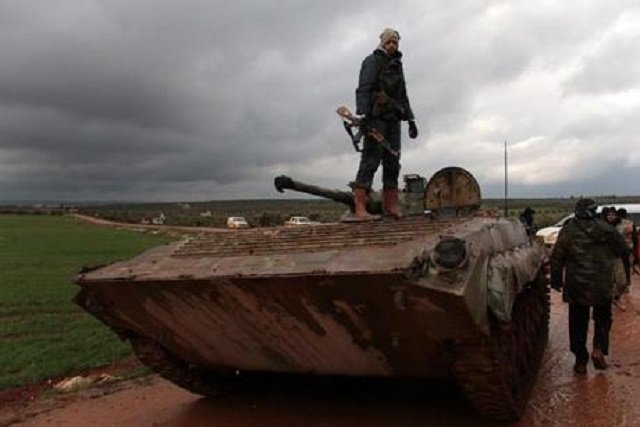 War of Aleppo is Turning Against Assad

February 22, 2016 8:38 am 0
At least 35 civilians killed in Aleppo
The Cleverest Move Yet by Ambassador Robert Ford
Syrian Forces Advance on Aleppo, Rebels Fear Another Siege

The Islamic State group and other jihadists on Monday cut a vital supply route linking the west of Syria’s second city Aleppo with other government-held territory, a monitoring group said. The war of Aleppo is turning against Assad after reinforcements arrived from different parts of the country.

With Russia bombing the moderate Free Syrian Army positions, only the Islamists and ISIS Russia has yet to concentrate its fire power against are left to battle the Assad regime. This is by Putin’s design in order for Assad to gain western support.

The road between Aleppo and the town of Khanasser to the southeast was the only way regime forces and civilians living in government-controlled neighborhoods of the city could travel to surrounding provinces.

If government forces are unable to recapture the road, it could slow an offensive they launched in the countryside around Aleppo earlier this year.

And it could worsen severe shortages of food and water for civilians.

“Jihadists from the Caucasus and from (China’s mainly Muslim region of) Xinjiang, as well as the jihadist group Jund al-Aqsa, cut the route from the south after a surprise attack. And fighters from IS cut off a different part of the route from the northern side at the same time.”

Thousands of foreign fighters have flocked to Syria over the past two years, many of them taking up arms with Al-Qaida affiliate Al-Nusra Front, IS or Jund al-Aqsa.

It is not the first time that the government’s supply route to Aleppo has been cut.

Rebel cut it in 2013 and IS did so last year before being pushed back.

The new setback comes with government troops on the offensive north and west of Aleppo, where rebel forces in the east of the city are almost completely surrounded.

The Syrian civil war, which began with peaceful protesters marching against the terror and the tyranny of the Assad regime, has cost already 470,000 according to the latest and most accurate figures published by the New York Times.

War of Aleppo is Turning Against Assad