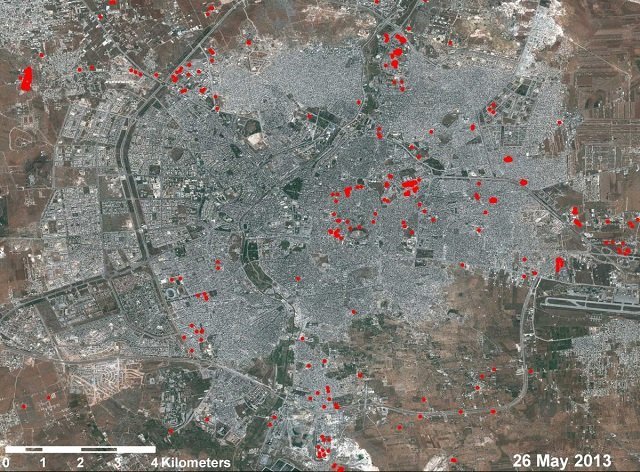 Is Obama Providing Putin with Intelligence on Syrian Opposition Positions?

Russian air strikes began on September 30, 2016. The Syrian army advanced inches for over three months until late January when suddenly it began to make considerable strides and stormed rapidly on all fronts even though nothing else changed. Is Obama providing Putin with intelligence about Syrian opposition positions? Is this why the sudden Russian victories are piling up?

Since the United States is providing aid and training to the rebels, the CIA knows more about their strengths and weaknesses, tactics and strategies, positions and locations than any other group bar possibly the Saudis and the Turks. Since Barack Obama has capitulated to Russian demands with regard to Assad remaining in power, and since John Kerry has threatened the Syrian opposition with consequences if it does not show up to Geneva 3, the rebels have experienced considerable losses on the ground. Meanwhile, the Russian air strikes have been relatively constant in their intensity. Something changed in favor of Putin. Is Obama providing Putin with intelligence about Syrian opposition positions?

Is this the reason why Sergey Lavrov, Russia’s foreign minister, said that his country’s military will not stop its air strikes until all the “terrorist organizations” in Syria are defeated? Lavrov not only has the green light from Obama but possibly the intelligence to finish the job. To Lavrov, as it is to Assad and Putin, even the moderate Free Syrian Army whose officers are often secular Muslims are considered “terrorists”.

Is Obama providing Putin with intelligence about Syrian opposition positions to end the Syrian war with a victory for the tyranny of Baschar al-Assad? After the Iran Deal fiasco, Barack Obama is looking to score another triumph in the realm of foreign affairs and what a better headline, in 2016, than “The Syrian war comes to a halt”. That millions of Syrians have suffered from the mass murderer Baschar al-Assad is rather secondary to Barack Obama. They can suffer for eternity as far as he is concerned as long as he gets the headline he can hang on his library wall.

If the Arab countries, along with Turkey, do not move quickly to equip the Syrian rebels with anti-aircraft, shoulder-mounted missiles to stop the Russian air strikes, Syria is lost to Assad, Iran, and Hezbollah. Syria returns to its old days of sowing terror and destabilizing the region except now, it has Russia supporting its actions directly and openly. Barack Obama has no clue what he is doing, and the West will pay dearly for the mistakes he is committing.

The flow of refugees to Europe, the lack of commitment by the West to defeat the Assad and the Khamenei terror in Syria, and the low oil prices now affecting oil companies negatively (Schlumburger laying off 11,000. Halliburton laying off 6,400. Shell oil lays off 10,000) are all contributing to stopping the Syrian civil war even if it means Assad remains in power. Obama needs his headline to suppress the one showing unemployment rising sharply in the US.

No better man to wag this dog by the tail than Barack Obama.

Is Obama Providing Putin with Intelligence on Syrian Opposition Positions?