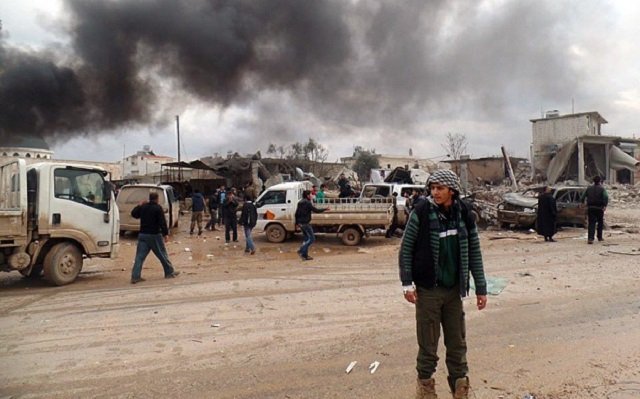 Russian warplanes severely damaged a British-funded bakery in northern Syria a few hours before the facility was due to start providing food for 18,000 people.

Hundreds of civilians have been killed by Russian air strikes since the onset of the Kremlin’s intervention on Sept 30. The targets of Russian bombs have included mosques, field hospitals and schools – all of which should enjoy protection under international humanitarian law.

The raid on the rebel-held village of Hazano in Idlib province was the latest occasion when a British-funded humanitarian facility was hit. Eight people were killed – including three children – during this air strike on Jan 20.

The attack took place at around 3pm on the day the bakery was due to open. Russian warplanes fired two rockets into a residential apartment just 30ft from the bakery, killing two families inside and injuring over 100 people.

The bakery was so severely damaged that it was prevented from opening. The facility was supposed to help feed over 18,000 civilians in the area, including thousands of refugees who had fled nearby combat zones.

Witnesses saw modern Russian warplanes – as distinct from Syrian regime aircraft – carry out the attack, according to the programme’s Syrian field officer in Hazano.

“Everybody was asking about when [the bakery] was going to open,” said the man, who can only be named as Hassan.

“People were travelling a long way in dangerous conditions to get bread.”

The Kremlin claims that its air strikes are targeting the Islamic State of Iraq and the Levant (Isil), also known as Daesh. But Isil are not present in or near Hazano.

“We don’t know why it was targeted but this is a civilian area,” said Hassan. “There is nothing here. There is no Daesh – they are 200 kilometres away.”

The Free Syrian Army, a non-Islamist rebel group, is in control of Hazano. About 85 per cent of Russian air raids struck targets other than Isil, according to a Foreign Office assessment of the first six weeks of the campaign.

A Foreign Office spokesman confirmed the attack on the British-funded bakery. Hazano is one of 37 civilian communities in Syria receiving funding from the Department for International Development under a British programme to develop civilian governance in some rebel-held areas.

The Foreign Office said there could not be complete certainty as to whether Russian or Syrian warplanes had carried out the raid on Jan 20, but Britain held the Kremlin responsible for a series of indiscriminate strikes.

Earlier this month, Philip Hammond, the Foreign Secretary, accused Russia of “deliberately attacking hospitals and schools and deliberately targeting rescue workers”, adding that Moscow should be “held to account for their breaches of international humanitarian law”.

Hassan, the field officer, said that local people feared the bakery would be targeted again once it opened.

The strike on a British-funded facility came as a variety of rebel movements were invited to join peace talks in Geneva on Friday.

Bashar al-Assad’s regime is currently besieging 49 rebel-held areas across Syria, preventing the United Nations from delivering food to between one and two million people. A member of one opposition block, the Syrian National Coalition, said that it would not attend the peace talks unless the regime lifted these sieges.

Russia has also insisted that the main Kurdish armed group in Syria, the Democratic Union Party (PYD), should be allowed to join the negotiations. But Turkey has threatened to boycott the Geneva meeting if the PYD is represented.

Gareth Bayley, the British special representative for Syria, accused Russia and the Assad regime of jeopardising the peace talks by escalating their attack on non-Isil rebel movements. “By continuing to support the regime in its bombardment of the moderate opposition, Russia risks damaging the already fragile process of intra-Syrian negotiations,” he said.