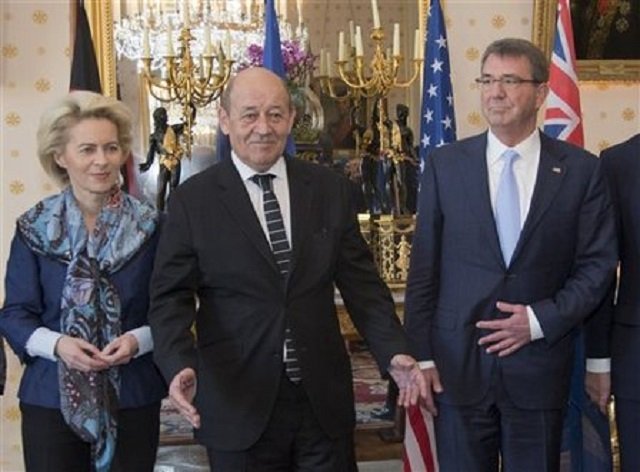 “The Russians are on the wrong track strategically and also in some cases tactically,” said U.S. Defense Secretary Ashton Carter after a meeting in Paris of seven defense ministers in the coalition fighting IS.

“We don’t have a basis for broader cooperation (with Russia),” Carter said.

His French counterpart Jean-Yves Le Drian said, for his part: “We hope that Russia will concentrate its efforts against Daesh (the Arabic acronym for IS) and stop bombing the groups of the uprising (against Syria’s psychopath Baschar al-Assad) who themselves are fighting Daesh.”

At the same time on Wednesday, Russian Foreign Minister Sergei Lavrov said Russia was ready to work more closely with the U.S.-led coalition to help facilitate aid deliveries inside Syria even with western condemnation of Russian role in Syria.

Speaking after talks with his U.S. counterpart John Kerry in Zurich, Switzerland, he said: “We spoke about how the Russian air force, when planning its actions, takes into account the programs that the U.N. humanitarian organizations, the Red Cross and other NGOs carry out.

“We said that we will be ready to more closely coordinate our actions with the American coalition in this direction.”

He also said U.N.-brokered Syria peace talks would begin “in the next few days” in Geneva.

Lavrov rejected suggestions that the negotiations, tentatively set for January 25, might be delayed until February amid disagreements over who will represent the Syrian opposition.

“We are sure that in the next few days, in January, these talks should begin,” he told reporters.