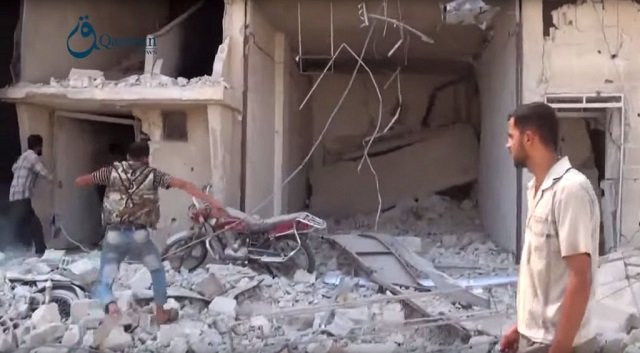 Russian airstrikes in Syria have hit at least three medical facilities, according to Physicians for Human Rights (PHR), an international advocacy organization that documents attacks on medical workers around the world. PHR said that each of the facilities are located at least thirty miles from territory held by the so-called Islamic States, or ISIS.

“Claiming that the fight is against terrorists does not give any government the right to tear up the laws of war, which specifically protect health workers and facilities,” Widney Brown of PHR said in a statement. “With these actions, Russia is damaging hospitals, putting patients and medical staff at risk, and depriving civilians of life-saving access to health care.”

PHR said that it has confirmed that Russian warplanes bombed a field hospital in northern Hama and an ambulance depot in Idlib on October 2, and then struck the al-Burnas Hospital near the Turkish border on the following day.

Activists on the ground in Syria claim that the majority of Russian bombs have hit civilian targets, a charge that Moscow has denied.

“They destroyed four or five of our vehicles,” said Ammar Martini, a physician who runs Orient Humanitarian Relief, an ambulance service in northern and central Syria. “These attacks were specifically targeting Orient.”

The Daily Beast reported on the attack on Orient’s ambulances:

One recent sortie struck another Orient ambulance, this one transporting casualties from Ihsem, a village in the Jabal al-Zawiyah area, which lies about 30 kilometers southwest of the provincial capital of Idlib City. A medical facility there maintained by the White Helmets, a civil volunteer corps opposed to the regime and ISIS, was bombed on October 3. Two Orient paramedics were wounded while ferrying the injured out of the village. Luckily, they survived. But after the Russians bombed Jabal al-Zawiyah, regime helicopters swooped in and dropped one of their nastier munitions—barrel bombs, according to Martini. These are large metal drums packed with shrapnel and explosives, which Assad’s air force has relied on increasingly as a means to unleash the highest degree of devastation on the least discriminate target zone.

“They attacked Jisr al-Shughour and Latakia, but also Yamadea, where there is a big hospital that’s been in operation for about 40 years,” Martini said. “Thank God they didn’t hit it! The missile went elsewhere. They also struck on the outskirts of Hama, attacking a field hospital and killing a lot of people.”

Jawad Abu Hatab, a heart surgeon at the Doctors Without Borders Hospital (MSF) in Latakia saidthat he believes the bombs meant to hit the hospital — but just missed and landed on a nearby village instead.

Syria’s medical infrastructure is already badly damaged after four years of war. According to PHR, medical facilities have been attacked more than 300 times. The advocacy organization said that more than 90 percent of the attacks have been carried out forces loyal to Syrian president.

PHR has said that each of the attacks could constitute a war crime.

That allegation was made this weekend by MSF after U.S. airstrikes on a hospital in Kunduz, Afghanistan left 22 people dead.

Attacks on hospitals in Syria, however, have been so frequent that many now avoid them at all costs.

“Unless they feel their life is in danger, many people won’t go to hospital because it is targeted for bombardment,” an Aleppo-based physician told researchers with the Syrian-American Medical Society and the Johns Hopkins Center for Public Health and Human Rights.

Medical professionals also appear to have been targeted by government forces. Of the 25 Syrians interviewed by researchers, six had been arrested and tortured.

“Bashar al-Assad’s forces have been relentlessly attacking Syria’s health care system for the past four years and the Russian government is now following in their footsteps,” PHR’s Widney Brown said.

Russian officials have said the civilian deaths were “proof” that ISIS is using civilians as “human shields” by hiding weapons in densely populated areas.

But, as ThinkProgress has previously reported, Russian airstrikes have largely fallen far from territory held by ISIS. According to one analyst, a full 80 percent of Russian airstrikes have hit the armed groups fighting against forces loyal to the Syrian regime. In other words, Russia appears to be targeting American allies in Syria instead of combating ISIS or Assad.