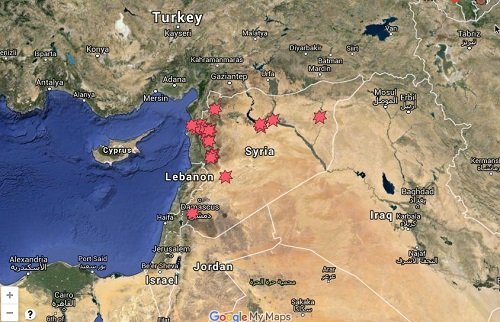 February 28, 2016 1:13 pm 0
Watch For Your Feet When Dancing With a Russian Bear
Russian Air Strikes Cause Displacement of 120,000 Syrians
Russian opposition plans protest over Putin’s war in Syria

Russia is marketing its military hardware systems online by reminding their potential customers of the weapons they used in Syria and how efficient they were as killing machines. Under normal circumstances, one can turn a blind eye to their business trespassing if their weapons were not used often to kill Syrian civilians, women and children, bomb hospitals and schools. This is how Syria became a Russian weapon testing facility.

In an article in Sputnik entitled, “Five Russian Weapons Which Made Their Deadly Debut in Syria“, the online website boasted about one of their weapons by writing the following:

In October 2015 the world became suddenly aware that Russia possesses sophisticated long-range cruise missiles. The message was spread by the country’s Caspian Flotilla in the most no-nonsense, matter-of-fact way possible, as its warships successfully obliterated a number of Daesh targets in Syria by launching Kalibr-NK missiles from hundreds of miles away. While many of this new cruise missile’s parameters still remain classified, apparently it has an effective range of 350 kilometers when deployed against naval targets and can hit assets on the ground from a distance of up to 2,600 kilometers.

Except for the fact that Russia has concentrated 10% of its strike against Daesh (ISIS) targets in the beginning of its bombing campaign, and it only is striking 30% of its targets today, the marketing fails to mention how many cruise missiles missed their targets.

The Aviationist, a website dedicated to everything aviation, published the image above pinpointing Russian strikes in Syria. Only the eastern-most strikes are against ISIS.

As far as how accurate their missiles were, here is a good description published by USA Today:

Four Russian cruise missiles launched from the Caspian Sea fell short of their Syrian targets and landed in a rural part of Iran, two U.S. military officials said Thursday, amid growing international concern about Russia’s actions in the region. The errant strikes were part of a volley of 26 long-range cruise missiles that Russia fired Wednesday, according to the officials, who asked not to be identified because they were not authorized to discuss intelligence matters.

Not only Russian weapons are inaccurate, inefficient, but they kill civilians as a result of their inaccuracies. How would you like to be accused, as the head of a civilized nation, of butchering civilians just because you bought the inaccurate weapons made by the wrong people?

Putin intervened in Syria to shore-up the butcher of Damascus, one psychopath who calls himself Baschar al-Assad and his psychotic brother Maher, but more importantly, Putin wanted to demonstrate the latest Russian military capabilities by turning Syria and its civilians into a live fire exercise. There are no international laws yet, on the books, that forbid a country to market its military hardware in the middle of war while it targets civilians. Nor are there any that forbid a thug like Putin from using his unchecked powers to kill civilians at will while hiding behind the Russian veto at the United nations.

Had Putin concentrated his firepower on striking ISIS, this article would not have been written. And we would have been the first to hail him as a hero instead of a thug.