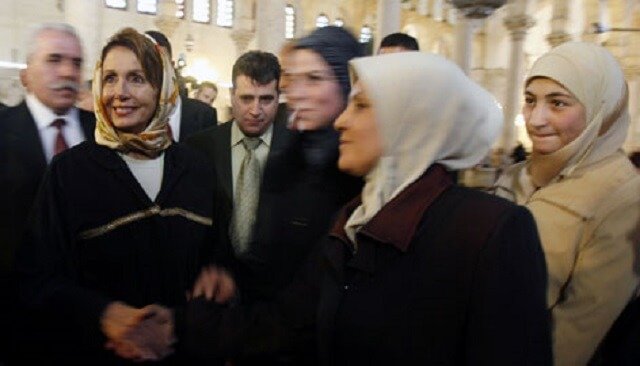 Little Signs Assad Is Losing Even With Russian Help

Those who know the Assad regime intimately see today little signs Assad is losing even with Russian help.

In the good old days, during the Iraq War when U.S. President George Bush was exerting pressure upon the Assad regime, the psychopath Baschar al-Assad used to invite some imbecile to stand publicly by his regime of tyranny to claim the West should talk to Assad. Remember Rep. Nancy Pelosi’s trip to Syria in April of 2007?

After almost one month of Russian bombing that had little to no effect effect on the grounds whatsoever, Assad is doing it again.

The latest imbecile to claim the West should talk to Assad is a French Member of Parliament named Jean-Francois Poisson who uttered these words on his behalf while on visit to Syria:

“The settlement of the Syrian political situation necessarily requires a dialogue with the Syrian president who is in place and is elected by the Syrian people. “

Poisson is a far-right winger who could have also followed with “Death to Syria’s civilians or death to Israel” in the same sentence. The idiot Poisson calling for the tyranny of Assad, the cause of terror in Syria, is just little signs Assad is losing even with Russian help. Assad is desperate for the West to embrace him and his regime of tyranny.

He expected Europe to embrace him after he caused the largest exodus in Muslim modern history, which led one million Muslims towards Europe. He even facilitated their migration by hiring scouts and facilitators to find ways for them into Europe as a way to pressure the EU’s leadership to embrace his terror. Are you wondering why the spigot of migrants suddenly stopped? Assad facilitators have either been arrested or Assad had no choice but to curb them.

After one month of Russian air strikes that has not advanced the Assad regime forces, or Hezbollah, one inch, Assad is desperately seeking the West backing so that he could forge more Islamic terror, and threaten U.S. interests and allies.

His choice of the far-right idiot Poisson must sit quite well with the far-leftist Barack Obama who decides Assad’s fate.

Little Signs Assad Is Losing Even With Russian Help

Give Syria a Chance
If the Roman Empire Fell to Terror, What are Assad’s Chances?
The Slow Genocide Against Christians in the Middle East
Syria 450 Syrian Revolution 1350