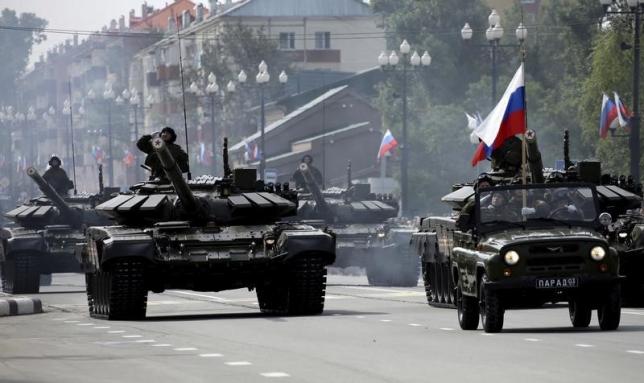 Russia’s defense budget will be cut by 5 percent in 2016, Russian Deputy Defense Minister Tatiana Shevtsova said, according to the RIA news agency. Putin bleeding Russia dry with his reckless policies, especially in Syria in support of the Assad tyranny and in the Ukraine by tyrannizing a peaceful country into submission and annexing the Crimea.

All of this in concert with communist Barack Obama who has provided Putin and mother Russia the space and the time to expand its footprint where it hurts American interests the most. The Syrian refugees Obama refused to protect with a no-fly zone are intended to weaken NATO.

Deutche Welle described Putin’s danger with this opening for an article:

NATO’s top commander in Europe, Philip Breedlove, made the claim about the migration crisis during US Senate testimony. He also warned lawmakers that Russia posed a renewed existential threat to the US and its allies.

Defense spending has been growing as part of a drive by President Vladimir Putin to restore Russia’s military might. The decision to cut shows, however, that even the armed forces are not immune to a slowing Russian economy, which has been hit by falling oil prices and Western sanctions.

The 5 percent cut, if approved by Putin, would be the biggest reduction in defense spending since he took office in 2000.

In 2011, while prime minister, he announced plans to revitalize the Russian army and its aging equipment by spending 23 trillion rubles by 2020. Military interventions in Ukraine and Syria have made strengthening the military an even greater priority for the Kremlin.

The cut represents a victory for the finance ministry, which has said Russia can no longer afford the multi-billion-dollar revamp of the armed forces and called for a 10 percent spending reduction across ministries.

The Russian economy shrank by 3.7 percent last year and is expected to decline by at least another 1 percent this year.