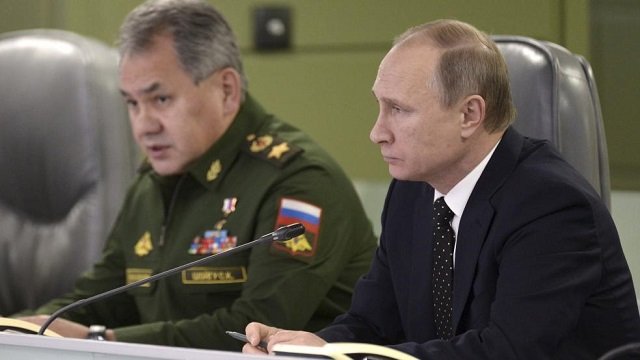 Source: The Fiscal Times – by Rob Garver (Putin Faces Military Cuts Even as He Fights in Syria and Ukraine)

As governments across Europe pour additional money into their defense budgets, wary of an increasingly aggressive Russia, it looks as though the Kremlin’s military build-up might be slowing. Recent reports suggest a possible 5 percent cut in defense procurement as Russia struggles with extraordinarily low prices for the oil and natural gas sales that power its economy.

Russian president Vladimir Putin, who has essentially controlled the country in one capacity or another since 2000, began a massive and expensive revamp of the country’s military in 2011, involving hundreds of billions of dollars in investment in modern equipment over a period of several years.

The build-up has remained a cornerstone of Putin’s domestic and foreign policy as he attempts to placate increasingly anxious Russian consumers not by putting the economy on firmer footing so much as by instilling a sense of shared sacrifice as he re-establishes Russia as a global power.

However, oil prices are still floundering in global markets, even as the Kremlin is fighting an open war in Syria and a covert war in eastern Ukraine. The Russian treasury has been vocal about its budgetary concerns, even calling for defense cuts, which Putin has so far opposed.

The admission that defense spending is not immune to the broader troubles affecting the Russian economy would be something of a step-down for Putin, even if the numbers involved are relatively small.

The potential cut would reportedly run to about $1.3 billion. (Defense procurement is a subset of the Russian defense budget, so this does not represent a 5 percent cut in total defense spending.)

According to the government-run TASS news service, former finance minister Alexey Kudrin said in January that “defense spending reductions are unavoidable.” While it might be possible to delay them for a short time, he added, “I don’t believe that defense spending is an untouchable ‘sacred cow.’”

Putin spokesman Dmitry Peskov last Friday told the media that he could not confirm reports of pending cuts to the defense budget.

“Various ways of cutting spending are being considered. A plan [for supporting the economy] is being finalized,” Peskov said, according to TASS. “I cannot say anything definite on that score now,” he said.

Defense spending accounts for about 4 percent of Russia’s gross domestic product, and much of that spending is pumped directly into the Russian economy via its large defense industry. Any slowdown in military spending will likely have an effect on the economy as a whole.

Loading...
Newer Post
Fools Are Those Who Believe Kerry’s Plan B Includes a Military Option
Older Post
UN Takes a Swipe at U.S., Russia for War Crimes in Syria