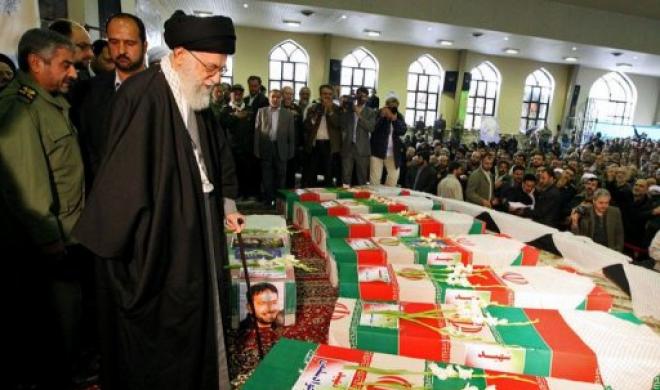 Iran has withdrawn a “significant number” of its Revolutionary Guards troops from the Syrian battlefield, US Secretary of State John Kerry said Thursday. If true, this begs the question: Have Iranian military casualties in Syria become domestically unmanageable? Or is this part of an Israeli-Russian agreement to appease Israeli concerns over Iranian IRGC proximity to their borders?

Iran is an ally of Syria’s psychopath Baschar al-Assad and has sent members of the elite force to act as “advisers” to his forces and to organize militia units with thousands of volunteers from Iran, Iraq and Afghanistan many we know are being buried anonymously in Syria.

Tehran also arms and supports Lebanon’s Hezbollah, which has itself dispatched forces to shore up the Syrian regime against local rebel forces.

But Kerry, speaking two days before a tentative ceasefire is due due to take effect in the long-running civil war, told a congressional committee that Tehran’s direct involvement had been reduced.

“The IRGC has actually pulled its troops back from Syria. Ayatollah Khamenei pulled a significant number of troops out. Their presence is actually reduced in Syria. That doesn’t mean that they’re still not engaged and active in the flow of weapons from Syria through Damascus to Lebanon. We’re concerned about that and there’s an ongoing concern.”

Kerry did not give the source of his information in the open hearing, but he invited the lawmakers “to get the intel briefing.”

Tehran has never released official figures for the number of its troops present in Syria, but according to Iranian dissidents who track Iranian casualties in Syria, almost 300 have been killed in one year to include several generals and other high officers.

The Syrian civil war, which began with peaceful protesters marching against the terror and the tyranny of the Assad regime, has cost already 470,000 according to the latest and most accurate figures published by the New York Times.

Loading...
Newer Post
The absence of US leadership makes the world more dangerous than ever
Older Post
Egyptian Freedom of Expression is a Victim of Tyranny