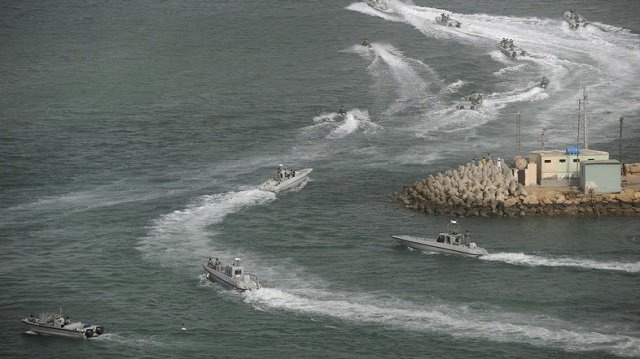 Iran’s navy on Wednesday warned a U.S. warship to leave an area of the Sea of Oman where the Iranians were holding an exercise, the Tasnim news agency said. The agency, close to the Revolutionary Guards, reported that after the warning to the vessel, it left the area instantly and “the situation returned to normal.” Under Obama, Iran commands US Navy fleet.

Iran detained 10 U.S. sailors on Jan. 12 after their boats entered its territorial waters because of what they said was a navigational error. After this incident, the U.S. Navy punished two officers and two enlisted sailors in charge of the riverine boat crews who surrendered to Iran, causing an international embarrassment to the Obama Administration. It also exposed a multiple errors by the Navy sailors that led to their arrest and their violations of regulations while in custody.

They were freed later, bringing a swift end to an incident that had rattled nerves just before the expected implementation of a landmark accord between Iran and world powers.

A few days later, international sanctions on Tehran were rolled back in return for its curtailment of some nuclear activities. Courtesy of Barack Obama’s wimpy foreign policy.

Iran said its naval drill near the strategic Strait of Hormuz on Wednesday was to test submarines, destroyers and missile launchers.

The manoeuvre aims to show Iranian forces’ strength both in ensuring security on the seas and in defending the country’s sea borders in Hormuz Strait, Sea of Oman and north of the Indian Ocean.

Tasnim news agency reported on Wednesday that Iran had given warnings to other Western ships on Tuesday, and they had cleared the area.