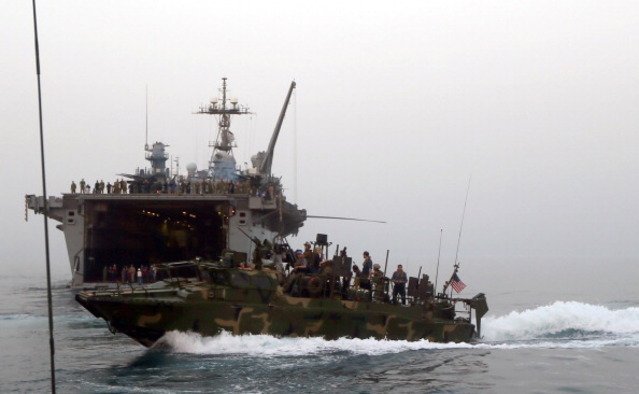 Kerry Thanks Iran for Resolving the Crisis It Created

Source: Bloomberg View – by Eli Lake (Kerry Thanks Iran for Resolving the Crisis It Created)

After the return of 10 U.S. sailors from Iranian custody Wednesday morning, the Obama administration has been eager to claim a diplomatic victory. What looked like the beginning of a hostage crisis on Tuesday night, unfolding as the president gave his last State of the Union address, was instead resolved by Wednesday morning.

The key to this success, we are told, was that the U.S. and Iran had a reliable diplomatic channel because of nuclear negotiations to defuse this potential crisis. On Wednesday, a senior State Department official briefed reporters about five phone calls between Secretary of State John Kerry and his Iranian counterpart, Javad Zarif. Kerry made it clear that the most important issue was getting the Americans released, unharmed — turning this into “a good story for both of us,” Kerry told Zarif, according to the briefer.

You can’t argue with results. The sailors are freed and safe. There is no hostage crisis now. When British sailors were detained in 2007 by Iran in a similar incident, it took nearly two weeks for Iran to release them. In this case it took less than a day. Kerry himself said Wednesday the resolution of the issue was “a testament to the critical role diplomacy plays in keeping us safe, secure and strong.”

But trumpeting this as a diplomatic success also presents a moral hazard. Iran’s handling of the situation violated international norms, and to pretend otherwise is — to borrow a phrase from sociology — to define deviancy down.

Let’s start with the incident itself. Two small U.S. sea craft transiting between Kuwait and Bahrain strayed into Iranian territorial waters because of a mechanical failure, according to the U.S. side. This means the boats were in distress.

That is hardly unprecedented. International maritime law spells out the appropriate response — and in a situation like this, it does not give Iran the right to board these boats or detain the sailors, as the Iranian navy did. And yet Vice President Joe Biden on Wednesday morning described the incident at Farsi Island as “standard nautical practice.” On CBS, he said: “One of the boats had engine failure and drifted into Iranian waters. The Iranians picked up both boats, as we have picked up Iranian boats that needed to be rescued.” Biden added, “That is the way nations should do it.”

Then there is the issue of how the crews of these boats were treated. The U.S. military, no doubt, is learning more about that now as the sailors are being debriefed, but Iranian news outlets already published photos of the sailors kneeling with their hands behind their heads. There is now a video circulating online that appears to show one of the sailors apologizing to a reporter.

Such photos and confessions are violations in and of themselves of the Geneva Conventions, which prohibits the circulation of photos of detainees. When asked about this Wednesday, State Department spokesman Mark Toner said, “I mean, generally speaking, you’re not supposed to show images of detained prisoners of war.” But he also said the State Department was still checking the authenticity of the photos and video that were released online.

Representative Mike Pompeo, a Republican member of the House Intelligence Committee and former U.S. Army officer, on Wednesday called for an investigation into whether Iran violated the Geneva Conventions during the detention of the 10 American sailors.

That is inconvenient for the “good news” story that Zarif and Kerry have sought to spin. Under their strategy, administration officials have praised Iran for treating the sailors well and resolving the situation quickly. Officials have glossed over the bad behavior that escalated a mechanical failure into a crisis in the first place.

There is a logic to this. Kerry and President Barack Obama engage with Zarif’s faction of the Iranian government and look past the provocations of Iran’s Revolutionary Guard Corps, which has been testing Obama’s resolve since Zarif agreed to the nuclear deal in July. This approach creates a strange dynamic. Zarif’s domestic opponents test ballistic missiles, fire past U.S. ships in the Persian Gulf and allow rioters to torch the Saudi Embassy, while Obama and Kerry do their best to stop Congress from punishing Iran for such provocations.

The tradeoff in the end may be worth it, particularly since Iran appears to be going through with the final steps of its obligations under the nuclear deal. Implementation of this bargain is expected to start in the coming days. Western countries will lift sanctions and return close to $100 billion in frozen Iranian assets in exchange for Iran shipping out low enriched uranium, disconnecting centrifuges, modifying one of its reactors and providing more transparency to its nuclear program.

But there is also a downside. If this is how Iran’s military acts now, before it has received the incentives of the nuclear pact, imagine how Iran will behave when $100 billion flows into its coffers. Kerry and Obama are counting on Zarif to put out any new fires his opponents will cause once the deal is implemented. But in Iran, the firefighter and the arsonist work for the same supreme leader.

Kerry Thanks Iran for Resolving the Crisis It Created