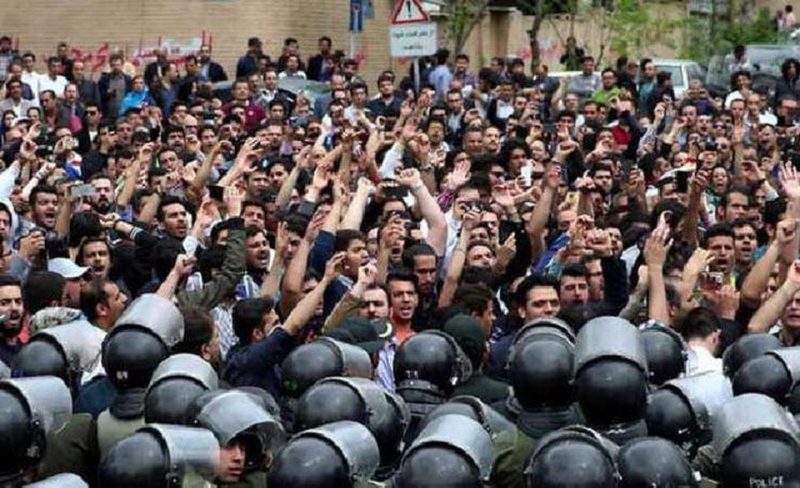 March 13, 2018 9:36 pm 0
Terrorist Khamenei Losing His Grip Over Iraq
Saudi Arabia Do Join Israel in Defeating Iran in Syria
Watch out for the Trolls, the Moles, and the Foals on Social Media

As the Iranian new year approaches, anti-regime protesters are taking to the streets in a show of force to the country’s Ayatollah, demanding greater freedoms like Internet access.

The Fox News Investigative Unit, using the encrypted messaging service WhatsApp, interviewed two of the protest organizers from their home base in Iran.

“We are like a wave — we come back even stronger, and the Iranian people want regime change,” one of the protesters said Tuesday. “There is no going back.”

Protest organizers say the time may be up for the regime of supreme leader Ayatollah Ali Khameini. They are encouraging Iranians to demonstrate in the streets this week in what they believe will be bigger protests than those that took place two months ago. The people Fox News spoke with say they are confident the opposition could win this time around and they think the regime may be realizing that, as well.

The organization behind the latest protests is The National Council of Resistance of Iran (NCRI), founded in 1981. It is considered the largest political opposition group in the country and, after a series of deadly protests spread to more than 140 cities over the course of December 2017 and January 2018, the NCRI and its constituent group, the People’s Mujahedin of Iran (MEK), are more motivated than ever to see the leadership of Iran ousted.

The NCRI helped connect Fox News with two activists based in Iran, a 27-year-old woman going by the name “Mitra” and a 30-year-old man, “Kavea.”

“[These kinds of protests are] new in Iran,” Kavea said. “History is being made by young Iranians… [but] I want to emphasize we see more types of people becoming involved. Former housewives, office workers. And for years the regime used to say the poor don’t support the uprising, but now you can see the poor are in the streets.”

Women are another group playing an increasingly major role in these protests, according to Mitra. “We have more things to struggle for,” she said. “Our nation, our humanity… our basic rights.”

She added that organizing, or even simply protesting as a woman comes with more of a risk. And that is no small thing, considering the reports that protesters are being tortured and their families threatened.

Tuesday marks an ancient holiday known as the “Festival of Fire,” an occasion that Khameini has publicly condemned — and that protesters have seized upon to signify their distaste with the country’s leadership. The holiday falls on the last Tuesday before the Iranian New Year, Nowruz (which literally means “new day”), and is marked by a tradition in which people jump over firecrackers — and sometimes open flames. Nowruz will take place on March 21.

And both Mitra and Kavea say this year’s Nowruz holiday protests could represent a truly “new day” for their nation.

Naturally, protests during this holiday have become a frequent occurrence, especially considering the Ayatollah’s explicit condemnation of demonstrations. And after those deadly protests earlier this year, demonstrations that President Trump himself endorsed on Twitter, the regime is threatening to crack down once again.

Cutting off access to the Internet, which is already restricted, is a frequent tactic employed by the regime during protests. The protesters are calling on the international community to put pressure on the regime for not only a free Internet, but freedom for their people.

“Any trade with this regime, or business with them, ends in the hands of [the Ayatollah], and it will be used to kill and suppress us,” Mitra said.

While a free Internet is among their top demands, Kavea adds that these tactics of repression may no longer be effective.

“The repression of the regime is a dead end,” Kavea said. “When you see these numbers of protesters, the message is clear… Iran is a volcano, and it will erupt much sooner than you think.”

“I think Nowruz this year can be for us a victory,” Mitra said. “Nowruz means ‘a new day.’ This year, we think we are getting close to a real Nowruz.”