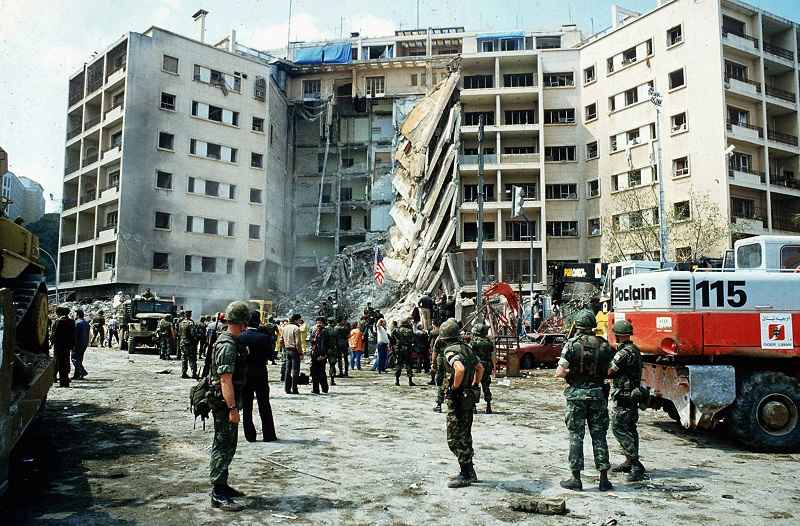 As Lebanon braces for more protests amid the rubble of a horrific blast and an economy burdened by corruption, mismanagement, and incompetence, the people of Lebanon, and all those coming to its aid, must ask the question: What happens when angry religious men of violence rule the country? Will Lebanon ever be safe from Hezbollah whose role is to deliver it, weak and fragmented, on a silver platter to Iran?

As long as Hezbollah retains its vast arsenal of weapons, it is hard to find a sensible political formula for the Lebanese to select their own government free from fear and intimidation. Countries that want to help Lebanon must start at the root of its endemic problem, which is the combined detriment of Hezbollah’s power as well as its incompetence and real goals as an Iranian agent. Hezbollah has risen to power in the early eighties, and ever since Lebanon has faced one calamity after another.

AN OPPORTUNITY TO REMOVE A CANCER

No country can ever prosper when its most powerful militia takes its marching orders from an enemy state. Fools are any western leaders who believe that aiding Lebanon means pouring money in its coffers without any consideration for its underlining political ailment.

Yes, there are many corrupt Lebanese politicians, but trying to micro-manage its recovery through a game of Whack-a-Mole is inefficient. It will not yield the crucial and needed results. Only an international effort to curb Hezbollah’s powers in Lebanon will free its people to chart their own future. And France, of all countries, understands the importance of a free and independent Lebanon whose people deserve our understanding and empathy. They all need to be free from the Hezbollah sword swooping down their neck.

No leader who takes a close look at the violent history of Hezbollah can surmise that Lebanon’s future looks brighter than its past. Whether it’s the bombing of the U.S. Embassy and killing of the U.S. Marines in 1983 in Lebanon, or prompting Israel to go after Hezbollah in 2006 to curb its violence, Whether it is the brazen assassination of former prime minister of Lebanon Rafik Hariri, or sending its fighters to kill and displace Syrian women and children, which forced many to land on European shores, Hezbollah’s danger is international in scope and purpose. It is a cancer that is destroying Lebanon. Scalpel, please!!!

Anger is running deep on the streets of Beirut, as President Macron witnessed first-hand. Harvest that street power to eliminate Hezbollah’s threat once and for all

THE ROLE OF FRANCE IS IMMENSELY IMPORTANT

The Hezbollah propaganda machine is working hard on tow fronts today. One is to deflect from Hezbollah’s involvement in the blast even though the benefits are obvious. Two, Hezbollah is trying to paint France as an invading colonial country, just as its long past history suggests. The last Hezbollah wants is for France to interfere into its Iranian schemes. Something that France is fully aware of when President Emmanuel Macron publicly asked Hezbollah to implement reforms and think of Lebanon’s interests rather than Iran’s.

Wishful thinking on the part of the President, we might say. A violent religious organizations does not implement reforms, nor is capable of thinking in that manner. Hezbollah exists for one reason only, which is to harass, threaten, and eventually kill the Jews in Israel. On the behest of Iran. The essence of Hezbollah’s existence endangers peaceful co-existence. Why? Because Hezbollah exists to eradicate the existence of others. Those goals are incongruent with the Lebanese people aspirations and hopes.

This is why France’s role is immensely important to derail Hezbollah’s sinister aims that can only sink the country further into oblivion. With Hezbollah at the helm, Lebanon is but a sink hole and a money pit. The western world must publicly condition its aid on reforms to include Hezbollah giving up its weapons. Anger is running deep on the streets of Beirut, as President Macron witnessed first-hand.

Harvest that street power to eliminate Hezbollah’s threat once and for all.