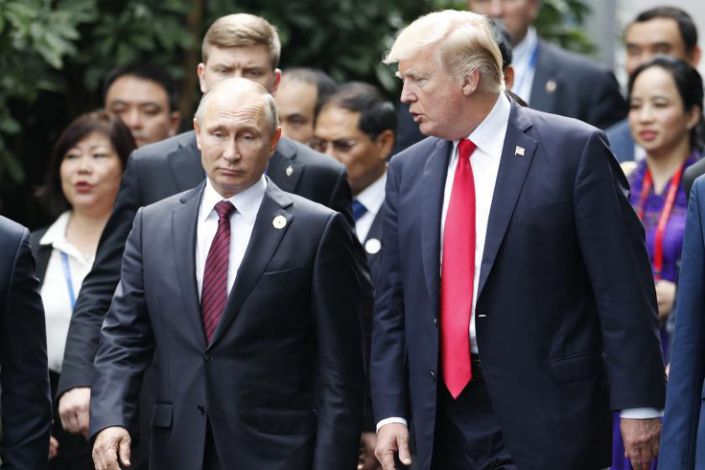 May 12, 2020 5:55 am 0
U.S. Says Syria Is Buying Oil From Islamic State
Assad Control Over Syria is Slipping
Iran Meet and Greet Terrorists

Of late, the Russian media has not been kind to Assad of Syria calling him a nuisance and a stubborn incompetent man. In retaliation, Assad turns a blind eye to a Syrian MP’s named Khalid al-Aboud Facebook post in which he attacks Russian President Vladimir Putin. Since no one dares to step out of line with such liberties in the Syria Assad rules without an official sanction, one wonders has Assad of Syria threatened Vladimir Putin? Indirectly. For letting the Russian media take a stab at him.

In other words, things are heating up between Assad and Putin. And smack in the middle is Iran urging Assad to hit back because the Russians may have decided that Iranian presence in Syria is no longer welcomed. This rift in the axis controlling Syria’s destiny is good news indeed. It may lead to breaking the stalemate with regard to s sensible political solution that would secure the removal of Assad and his thugs from power.

While this is taking place, the United States is not standing still. Ambassador James Jeffrey is taking advantage of the opportunity through diplomatic channels. It would not surprise us at all if the U.S. and Russia are planning or have met already, behind closed doors, to see  if they can come to an understanding over the future of Syria. Without Assad, of course because nothing short of Assad leaving power is acceptable to the U.S. position.

One factor, of utmost importance, is playing a role in Russia’s change of mind. It’s about the reconstruction of Syria and the lucrative contracts Putin is targeting should the West open up its wallet. With oil prices in the doldrums, as a result of the coronavirus, the timing fits everyone’s agenda. Especially Russia, which is looking to maintain a grip on its oil-dependent budgetary needs.

For Russia, it is coming down to making one of two choices: Maintain Assad in power and ride out the impact of the virus and oil prices crashing, or replacing Assad to find new sources of revenues. A side benefit to the latter choice would be that Russia’s Syrian expenditures would decrease if it can find, with the U.S., an agreeable political solution. One that would repay Russia any extra funds it spent defending Assad. This could mean taking over Syrian oil fields the U.S. is occupying today.

Either way, it looks more plausible for analysts to conclude that Russia is tilting towards removing Assad from power. This explains Assad dispatching a hack to threaten Putin and the media that gave him a good beating, something that would have sounded absurd few weeks back.

HOW TO REMOVE IRAN FROM SYRIA

Other than Assad, one of the key U.S. goals is to remove Iran from its occupation of Syria. Easier said that done thanks to Barack Obama who invited the Mullahs to occupy the country.

But how do you remove an occupying force whose footprint extends beyond its military presence to include political, social, and economic presence? Iran, literally, owns half the Syrian Parliament the way it owns the Iraqi Parliament. It has built Mosques, religious schools to convert the Sunnis of Syria, and social clubs to penetrate the society far deeper than a military occupying force ever could. Iran also has signed political and economic agreements with Syria that entrenched it further into its economy.

So how do you dislodge such infiltration? As complete as the one Iran has accomplished in few years?

A good start is to remove the one person protecting Iranian presence. That would be Assad himself. Afterwards, the U.S. would need to work with various Syrian entities to begin the process of reversing Iranian entrenchment in Syrian society, which might be a long and painful process. Inevitably, Iran is not going to roll over and take its dissolution lightly. It will fight back by assassinating high government officials working to dislodge its influence.

The point is that anyhow you slice this ham, Syria and Syrians, in particular, are going to suffer even more in the years ahead. There is no easy solution for Obama’s tragic blunder. He funded Iran to go into Syria and turned a blind eye to its occupation. It is what America gets when it elects a President whose agenda is as secretive as his early political life.