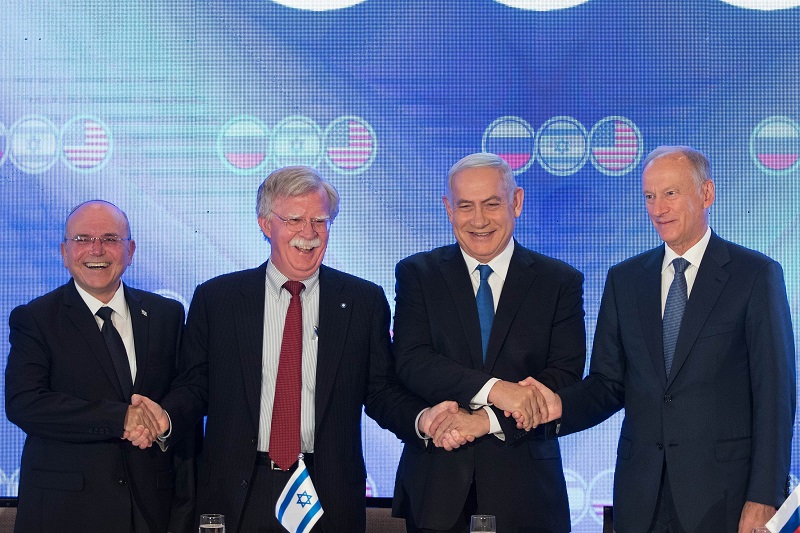 Breakthrough cooperation to weaken Iran and dislodge her from Syria is shaping up between the United States, Russia, and Israel. The last meeting in Jerusalem between their top national security advisers has resulted in two facts that we know about.

First, Russian pressure on Assad to remove all pro-Iranian top advisers to Assad from power. One such casualty was Jamil Hassan. Assad recently dismissed the top security chief from his post at the brutal Air Force Intelligence Directorate to replace him with a pro-Russian figure.

Second was the announcement by Gerd Pedersen, the United Nations special envoy to Syria. that the U.N. is close to an agreement with Syria on setting-up a constitutional committee. Such committee would be re-writing a new constitution for Syria, an effort Assad and Iran resisted for years citing Assad sole sovereignty over the constitution. Russian cooperation on this matter plays in favor of a regional peaceful diplomacy Assad is incapable of comprehending given his mental state of mind.

Why is Russia cooperating with the United States and Israel on finding diplomatic solutions for Syria? Why does Russia want Iran out of Syria? It goes against the old Cold War confrontational approach.

For one, Russia is playing the long game. One that will survive Donald Trump and his close relationships to the State of Israel. If another Barack Obama appears in America’s future, and we have some presidential candidates showing this inclination, Russia would be sitting pretty having scored valuable political points with Israel.

Iran will always be a rogue nation given its leadership. Not worth Russia’s time to invest more in troublesome leaders than in better influence with democratic Israel by its side.

Russia is building trust in the Middle East and it seems it does not include cooperating with Iran. Who is to blame Putin for sidestepping the poisonous snakes ruling Tehran?

Will this mean Russia might contemplate replacing Assad in the future? It is possible, and even probable, if Putin’s diplomatic grand scheme plays to its full mature potential. There are three countries that matter to Russia in the Middle East.

If Assad becomes too quarrelsome, we believe Russia is open to his replacement. Putin understands Assad toxicity because of his atrocious crimes. He understands how little support he has even among the Alawites who suffered as much from his reckless policies.

We also believe Israel has much to say to Russia about whether Assad stays or goes. If Assad does not cooperate fully on dislodging Iran from Syria, he will be out in no time.

The stage is set. High stakes diplomacy for one superpower to dislodge another are underway.