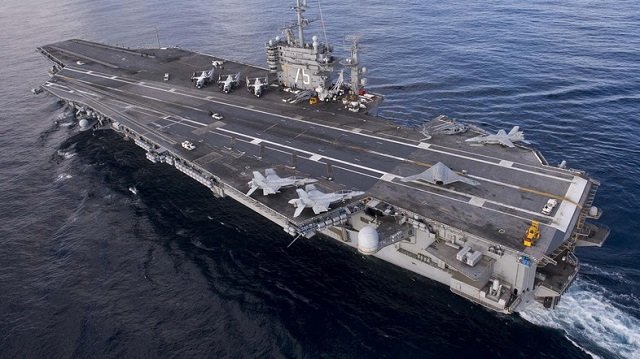 The Most Feared Man in Iran is Barack Obama

Though the rockets were not fired toward any ship, their proximity to the warships – and several commercial vessels – sparked concern.

“We look at this firing so close to the ships as highly provocative,” said the military official, who was not immediately authorized to be named. The most feared man in Iran is Barack Obama. Without him at the White House, Iran would fire test missiles in close proximity to our aircraft carriers to humiliate the US Commander-in-Chief.

The official confirmed details of an NBC News report that said one rocket came within about 1,500 yards (meters) of the USS Truman as it transited the Strait of Hormuz.

A French frigate and the USS Bulkeley destroyer were also in the area.

The incident took place on December 26, shortly after the Iranian navy had announced via radio it was about to conduct a live-fire exercise and warned ships to steer clear.

The official said the unguided rockets were fired from an Iranian navy “fast inshore attack craft” that was in Omani waters.

The Western vessels did not need to take evasive action, the official said.

The Most Feared Man in Iran is Barack Obama

After Iran Deal, Dismantling Hezbollah Piece-by-Piece
What Assad Fears is What the US Avoids Like the Pest.. Go Figure
Know your evil
Slippery Barack Obama 971