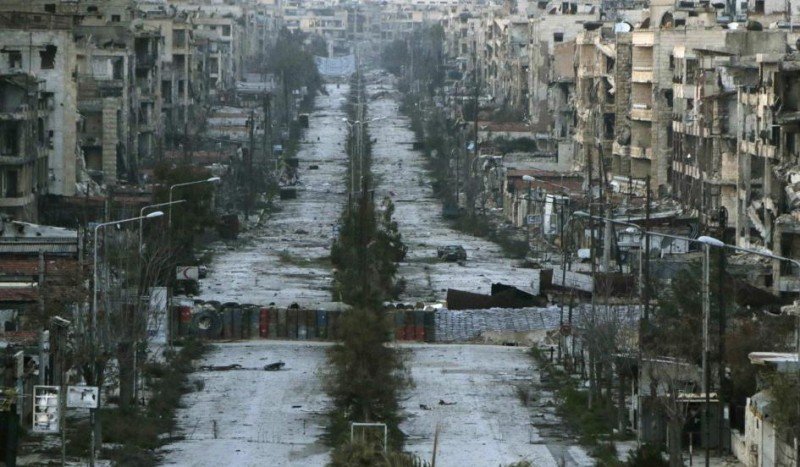 How Four Years of Civil War Has Destroyed Syria

March 17, 2015 12:22 pm 0
Of Masochistic Non Interventionists and Their Flying Saddles
UN raises billions for Syria relief, and critics ask if it is helping Assad
Shaming and Honoring Syria’s Talented Artists

Four years into its civil war, Syria is a “catastrophic” disaster where society has begun to disintegrate, life expectancy has plummeted, most people are jobless and millions of children have abandoned school, a new report shows.

The Syrian Center for Policy Research, which is supported by two United Nations agencies, concludes that human development is “rapidly regressing,” which is destabilizing a country that has long been the strategic center of the Middle East.

Syria began to implode shortly after Bashar al-Assad‘s regime cracked down on peaceful demonstrators in March 2011. The conflict has produced dozens of militias, including Islamic State, and destroyed vast swaths of major cities and countryside.

Survival is an issue for the majority of Syrians because the economy is no longer sound, the report says. Unemployment has surged to 57.7 percent from around 15 percent when the uprising began in 2011.

Four out of five Syrians live in poverty. Two-thirds are unable to secure basic foods and essentials for daily life, and Syria “has become a country of poor people,” the report warns.

Economic loss since 2011 exceeds $200 billion. “The armed conflict has depleted the capital and wealth of the country,” researchers conclude. “The continuing closure of businesses and the shedding of labor have resulted in a fundamental restructuring of the economy, with a lacerating contraction of most economic sectors.”

Education is in a “state of collapse.” More than half of Syrian children no longer go to school. Most have not been to school for three years, spawning the beginning of a lost generation.

In desperation, the “economy of violence” has led growing numbers of Syria’s young people to enlist in networks engaged in illicit activities, smuggling and war-related enterprises, the report says.

Human geography has been transformed in just four years, the report warns. Syria’s population has been hollowed out by 15 percent; more than half of Syrians have been displaced from their homes by violence. More than 3.3 million have fled Syria as refugees, with an additional 1.5 million migrating to find work and safer terrain in other countries.

Physical trauma is rapidly escalating too, the report says. At least six percent of Syria’s population has been killed, maimed or wounded over the past four years. The number of injured has reached 840,000, while the death toll almost doubled in 2014 and is nearing a quarter-million people—with no end to the conflict in sight.

International diplomatic efforts so far have failed. Western-backed rebels have increasingly lost territory over the past year to militants in Islamic State and Nusra Front, with the exception of Kobani, a small Kurdish town on the Turkish border.

And the Assad regime, with help from Iran and Lebanon’s Hezbollah militia, appears able to survive for the foreseeable future. There may be many more years of war to come, mainly at the expense of Syria’s people.

How Four Years of Civil War Has Destroyed Syria