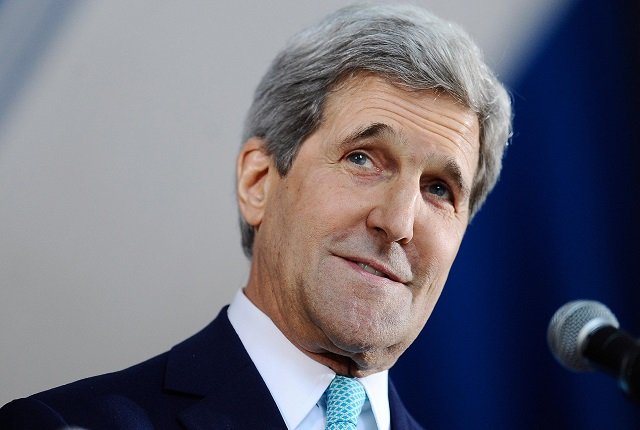 America is Governed by Masochistic Men Who Lost Their Cojones

When John Kerry is not pirouetting in the laps of either Vladimir Putin or Sergey Lavrov, he is on his knees kissing the hairy assess of the Mullahs. America is governed by masochistic men who lost their cojones.

Imagine just this image. After illegally capturing and detaining 10 U.S. sailors, instead of standing tall for the America that gave him every opportunity to be proud, John Kerry, instead, kneels down and thanks the barbarians in Tehran for releasing the 10 sailors. No Secretary of State has turned this great nation into a small hapless country like Barack Obama and John Kerry have.

Kerry just invited the Mullahs to humiliate America again. That our enemies are watching this episode of weakness never even occurred to Kerry.

Today, he thanked Iran for its cooperation in the release of 10 sailors. Folks, here are his shameful words:

“I want to express my gratitude to Iranian authorities for their cooperation in swiftly resolving this matter. That this issue was resolved peacefully and efficiently is a testament to the critical role diplomacy plays in keeping our country safe, secure, and strong.”

The nine men and one woman were held at an Iranian base on Farsi Island after they were detained nearby on Tuesday. The tiny outpost has been used as a base for Revolutionary Guard speedboats as far back as the 1980s.

The sailors departed the island at 0843 GMT aboard the boats they were detained with, the Navy said. They were picked up by Navy aircraft and other sailors took control of their boats for the return voyage to Bahrain, where the U.S. 5th Fleet is based.

Meanwhile, back in Iran, the Mullahs were dancing with jubilation by further humiliating Barack Obama. America is governed by masochistic men who lost their cojones.

Following the capture, two US and French aircraft carriers as well as their accompanying fleets and military choppers started maneuvering near Iranian waters.

“The USS Truman Aircraft carrier showed unprofessional moves for 40 minutes after the detention of the trespassers, while we were highly prepared with our coast-to-sea missiles, missile-launching speedboats and our numerous capabilities” and were ready to strike them in case they made a hostile move, Rear Admiral Ali Fadavi said after Iran released the detained US marines.

Fadavi complained of the provocative and uncontrolled behavior shown by the US navy, and said while the 10 captured marines showed not much resistance and accepted to give in to the Iranian troops, the US fleet that arrived near the scene later made many show-off moves near Iran’s sea borders.

“But we communicated an announcement through the international (radio) systems and prevented any further irresponsible moves by them,” he said, and continued, “Then they came to realize the IRGC Navy has the first and the last word in here.”

“The US and France’s aircraft carriers were within our range and if they had continued their unprofessional moves, they would have been afflicted with such a catastrophe that they had never experienced all throughout the history,” the IRGC Navy commander cautioned.

Happy yo voted for a coward into the White House accompanied by his ballerina who kneels often?

America is Governed by Masochistic Men Who Lost Their Cojones