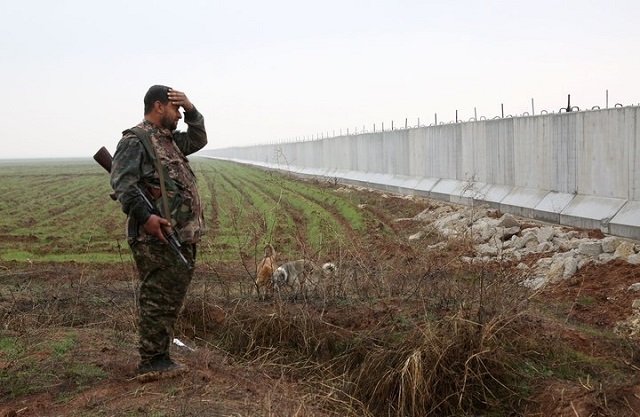 America Is Now Fighting A Proxy War With Itself In Syria

Source: Buzzfeed – by Mike Gigglio (America Is Now Fighting A Proxy War With Itself In Syria)

Confusion in the Obama administration’s Syria policy is playing out on the ground as U.S.-backed groups begin battling each other.

American proxies are now at war with each other in Syria.

The infighting between American proxies is the latest setback for the Obama administration’s Syria policy and lays bare its contradictions as violence in the country gets worse.

The confusion is playing out on the battlefield — with the U.S. effectively engaged in a proxy war with itself. “It’s very strange, and I cannot understand it,” said Ahmed Othman, the commander of the U.S.-backed rebel battalion Furqa al-Sultan Murad, who said he had come under attack from U.S.-backed Kurdish militants in Aleppo this week.

Furqa al-Sultan Murad receives weapons from the U.S. and its allies as part of a covert program, overseen by the CIA, that aids rebel groups struggling to overthrow the government of Syrian president Bashar al-Assad, according to rebel officials and analysts tracking the conflict.

The Kurdish militants, on the other hand, receive weapons and support from the Pentagon as part of U.S. efforts to fight ISIS. Known as the People’s Protection Units, or YPG, they are the centerpiece of the Obama administration’s strategy against the extremists in Syria and coordinate regularly with U.S. airstrikes.

Yet as Assad and his Russian allies have routed rebels around Aleppo in recent weeks — rolling back Islamist factions and moderate U.S. allies alike, as aid groups warn of a humanitarian catastrophe — the YPG has seized the opportunity to take ground from these groups, too.

In the face of public objections from U.S. officials and reportedly backed by Russian airstrikes, the YPG has overrun key villages in the northern provinces of Aleppo and Idlib. It now threatens the town of Azaz, on the border with Turkey, through which rebel groups have long received crucial supplies. Over the weekend, Turkey began shelling YPG positions around Azaz in response, raising another difficult scenario for the U.S. in which its proxy is under assault from its NATO ally.

Yet as America has looked on while Russia and Syria target its moderate rebel partners, it has failed to stop the YPG from attacking them too. “That is a major problem,” said Andrew Tabler, a Syria specialist at the Washington Institute for Near East Policy. “It’s not just that it’s a nonsense policy. It’s that we’re losing influence so rapidly to the Russians that people just aren’t listening to us anymore.”

Othman, the Furqa al-Sultan Murad commander, said the YPG tried to seize two areas of Aleppo under his control, resulting in firefights that left casualties on both sides. He had captured seven YPG fighters and was holding them prisoner, he added.

Othman’s group receives weapons from the U.S. and its allies, including TOW anti-tank missiles, he said, and fights Assad as well as ISIS. The aid is part of a long-running CIA effort approved by Congress and coordinated from an operations room in Turkey with participation from international allies of the rebellion such as Saudi Arabia. Othman said he was in regular contact with his American handlers about the problems on the ground. “The Americans must stop [the YPG] — they must tell them you are attacking groups that we support just like we support you,” he said. “But they are just watching. I don’t understand U.S. politics.”

Officials with three other groups — the Northern Division, Jaysh al-Mujahideen and a coalition called Jabhat al-Shamiya — that have received support from the operations room also said they were now battling the YPG in northern Syria. “There are many groups supported by [the operations room] that are fighting the YPG right now,” said the Northern Division’s Col. Ahmed Hamada, who added that some of his fighters had received U.S. training in the past.

An official with the Turkish government criticized the U.S. for what he described as a Syria policy gone awry. “The YPG is taking land and villages from groups that are getting American aid,” he said, speaking on condition of anonymity due to the sensitive nature of the subject. “These are groups that are not only getting American aid. Some of them also got training from the Americans.”

The official added that U.S.-backed Arab rebel groups had seen their support dwindle of late, while the YPG was benefiting from a surge of interest from both Washington and Moscow. “The Americans are not giving the moderate rebels enough material. They are not providing any political support,” he said. “And they did not stop the YPG from attacking them.”

“They said we are not in control of the YPG in [those areas],” he added. “That’s the official answer. It doesn’t make any sense to us. What can I say?”

In an emailed statement, Col. Patrick J. Ryder, a spokesman for the U.S. Central Command, which oversees support for the YPG, said he had no information to provide “regarding potential friction between various opposition groups.”

“Syria continues to be a very complex and challenging environment,” he said. “I can tell you that we remain focused on supporting indigenous anti-[ISIS] ground forces in their fight against [ISIS].”

A State Department official acknowledged the increasingly problematic situation. “We’ve expressed to all parties that recent provocative moves in northern Syria, which have only served to heighten tensions and lessen the focus on [ISIS], are counterproductive and undermine our collective, cooperative efforts in northern Syria to degrade and defeat [ISIS],” he told BuzzFeed News, likewise speaking on condition of anonymity.

A spokesman for the YPG declined to comment. Yet the group appears to be battling Islamists and U.S.-backed moderates alike, said Faysal Itani, a senior fellow at the Atlantic Council. “The YPG has also been physically capturing territory [around] Azaz, amid Russian bombing and regime progress further south in Aleppo province,” he said. “I see these moves as opportunistic, capitalizing on the insurgent losses in the province to increase YPG territory.”

The YPG is the Syrian branch of the Kurdistan Worker’s Party, or PKK, the insurgent force warring with the Turkish government in the country’s restive southeast. Both Washington and Ankara list the PKK as a terror group. Yet to Turkey’s increasing anger, the U.S. has sought to differentiate between the PKK and the YPG, promoting the latter as a key partner. In late January, Brett McGurk, President Obama’s special envoy to the anti-ISIS coalition, paid a visit to the YPG in the Syrian town of Kobane, which U.S. airstrikes had helped the group defend from ISIS last year.

The YPG fits well with the Obama administration’s growing hesitance to confront Assad: it has long maintained a détente with the Syrian government, focusing instead on pushing back ISIS and other extremists from Kurdish land.

As part of its embrace of the YPG, the Pentagon has propped up a new YPG-dominated military coalition called the Syrian Democratic Front (SDF) and encouraged smaller Arab battalions to join. In October, the U.S. government air-dropped a crate of weapons to the SDF in Syria, and it has also embedded special forces advisors with the group. This is both a bid to give U.S. support to the YPG some political cover and a nod to the reality that driving ISIS from its Sunni Arab strongholds will require significant help from Sunni Arab fighters.

A Department of Defense official sought to distance U.S. efforts from recent YPG offensives around Aleppo. He said the U.S. was supporting the group east of the Euphrates River, in its fight against ISIS, but not in its new campaign against rebel groups to the west. “Some of the Kurdish groups west of the Euphrates” have been “engaging with some Syrian opposition groups,” he said, speaking on condition of anonymity.

“What’s important here is that we are not providing any direct support to these groups,” he added. “Our operations have been focused on the SDF east of the Euphrates as they fight ISIS.”

The battle between America’s two proxies reflects the competing impulses of the Obama administration’s Syria policy. “The SDF model is meant to replace the failed [operations room] model,” said Nicholas Heras, an analyst at the Center for a New American Security.

Yet he noted that groups like Furqa al-Sultan Murad are battling ISIS as well as Assad — and still considered a bulwark against the extremists by the U.S. “It is a front-line combatant against ISIS,” he said of the battalion.

The recent clashes could make it difficult for the U.S. to build the crucial Arab component of its ISIS fight, the Washington Institute’s Tabler said. “If this continues, the U.S. is only going to have one option it can work with, which is the YPG. It’s not going to have the Arab option,” he said. “Which would be fine if the Kurds were the majority of the Syrian population, but they’re not. We need Sunni Arabs to defeat ISIS.”

America Is Now Fighting A Proxy War With Itself In Syria