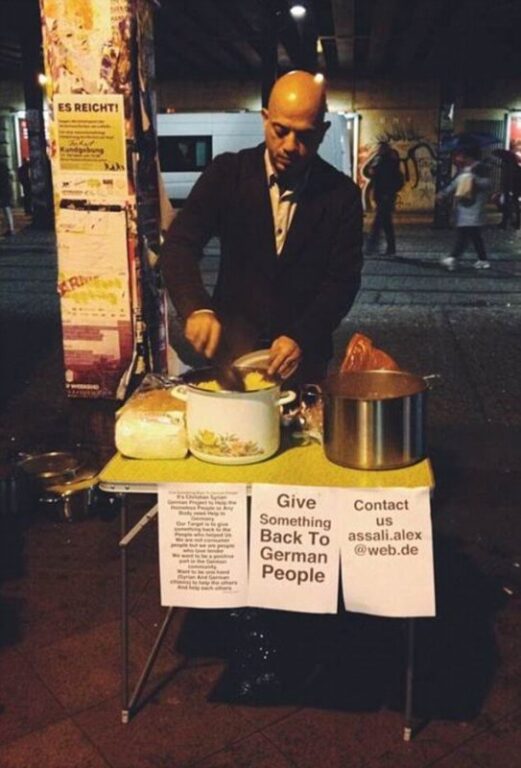 Source: The Daily Mail – by By Siofra Brennan (‘Joyfully heartbreaking’ photo of Syrian refugee who feeds the homeless in Berlin to ‘give something back’ sweeps the internet)

A Syrian refugee living in Germany has started a project to say thank you to the country that’s given him a safe haven.

Every Saturday Alex Assali cooks hot meals, which he distributes free to the homeless outside Berlin’s Alexanderplatz station.

Now an image of Alex’s cooking stand which has a sign saying: ‘Give back to German people’, has been viewed more than 2.7 million times after being posted on Imgur.

One Imgur user commented that he represented what ‘humanity should look like’.

‘One of those beautiful gestures that outweighs its tangible significance in the physical world & means so much more on a human level. Bravo,’ another added.

A sign on Alex’s stand states that he’s part of a Syrian Christian project to help the homeless or anyone in need in Germany.

‘Our target is to give something back to the people who helped us,’ it says.

‘We are not consumer people but we are people who love tender.

‘We want to be a positive part in the German community. Want to be one hand (Syrian and German citizens) to help the others and help each other.’

AnonUKRadio wrote on Twitter: ‘Those who have nothing know what it’s like, so they are the first to give.’

A woman called Gaia described the image as ‘joyfully heartbreaking’.

Referring to those who are prejudiced against refugees, Stefan Solanki said he hoped the image would ‘shut a lot of people up’.

Meanwhile Alex’s friend Tabea Bü, who took the photo, wrote on Facebook that they were both ‘overwhelmed’ by the positive reaction.

In a post, translated from German, she said that Alex had ‘lost everything’.

‘He had to leave his family back in Syria because people wanted to kill him,’ she said.

Alex fled Syria with nothing and travelled to Europe, via Lebanon, Cyprus, Egypt, Sudan and Libya before he finally settled in Germany.

‘Even though he doesn’t have a lot, he goes on the street and distributes food to the homeless Tabea said.

‘His motto is: “Give something back to the German people”.

‘God bless him, he is a blessing for so many more.’

She said the pair had received supportive messages from people all over the world.

‘We both never imagined what this little post could do, but we are happy that we did bring a little light into the world.’

America’s Self-Inflicted Wound in Syria
America Is Now Fighting A Proxy War With Itself In Syria
When Will America Realize Obama is Unfit to Lead?
Things That Matter 382