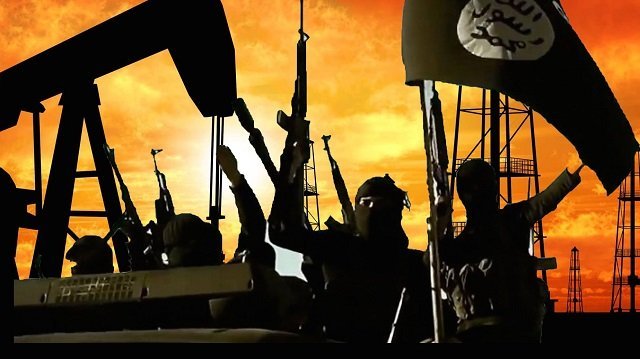 November 25, 2015 5:20 pm 0
Syria is the Superbowl of Islamic Fanatics
Russia Teams Up With Islamic State Against Syria’s Rebels
How Putin Is Deliberately Empowering Islamic State in Syria

The Obama administration accused Syria’s government of purchasing oil from Islamic State and blacklisted a Syrian-Russian businessman suspected of facilitating those transactions.

The U.S. Treasury Department also penalized Russian and Cypriot businessmen and companies suspected of helping the Syrian central bank evade international sanctions through a web of companies based in Russia, Cyprus and Belize.

The Treasury’s actions bar U.S. nationals from doing business with the designated entities and freeze any assets they hold in the U.S. financial system.

U.S. officials have long voiced concerns that the regime of Syrian  [psychopath] Bashar al-Assad was strengthening Islamic State’s finances by purchasing oil produced by the militant group on territory that used to be controlled by Damascus. However, Wednesday’s charges are the most explicit and direct accusations by the U.S., and the first time sanctions have been imposed over the regime’s oil trade.

However, the timing of the charges against the Assad regime of buying oil from Islamic State extremists gives U.S. policy makers and allied diplomats new leverage to use against Russia as the West pressures Moscow to distance itself from Damascus. French PresidentFrançois Hollande was due to meet Russian President Vladimir Putin in Moscow on Thursday to discuss recent terror attacks targeting both countries.

On Wednesday, the Treasury accused a Syrian-born businessman, George Haswani, who his a dual Syrian-Russian citizen, of using his firm, HESCO Engineering and Construction Co., for facilitating oil trades between the Assad regime and Islamic State.

The European Union blacklisted Mr. Haswani in March. Mr. Haswani has appealed the EU move. He couldn’t be reached to comment, and his lawyer didn’t return a request to comment.

The U.S. imposed sanctions on Syria’s central bank over a decade ago for its alleged involvement in money laundering. Adib Mayaleh, the governor of Syria’s central bank, was sanctioned in 2012 for allegedly using his job to move funds out of the country.

The Treasury on Wednesday accused Mr. Ilyumzhinov of working closely with the Assad regime’s business associates in Syria and Russia to help the Syrian central bank avoid sanctions. This included the use of Moscow’s Russian Financial Alliance Bank, of which he is a major shareholder.

“Kirsan Ilyumzhinov was designated today for materially assisting and acting for or on behalf of the Government of Syria, Central Bank of Syria” and two central bank officials, the Treasury statement said.

Mr. Ilyumzhinov couldn’t be reached through the Russian Financial Alliance Bank on Wednesday.

An aide to Mr. Ilyumzhinov at the World Chess Federation, reached in Rome, declined to comment.

The Treasury also imposed sanctions on three Cyprus-based companies and a Belizean firm for allegedly assisting the Syrian government in money laundering activities.

“The United States will continue targeting the finances of those enabling Assad to continue inflicting violence on the Syrian people,” the Treasury Department’s acting undersecretary for terrorism and financial intelligence, Adam Szubin, said Wednesday.

—Benoît Faucon contributed to this article.