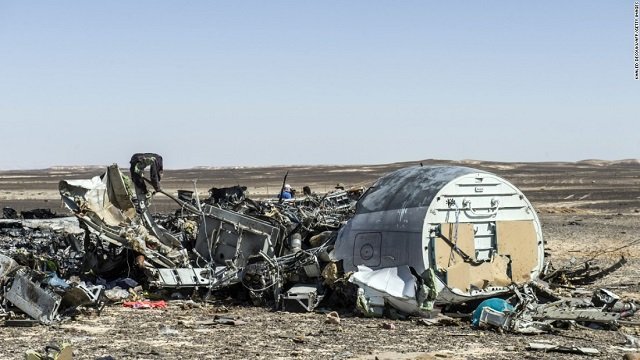 In an interview with Rossiyskaya Gazeta state newspaper parts of which were published Monday evening, he said:

“The possibility of an act of terror is of course there as the reason for what happened.”

Britain and the United States, as well as international investigators, suspect a bomb exploded on board of the A321 plane chartered by a Russian tourism firm, but Egyptian officials insist there is no evidence yet of an attack on the plane.

Either way, the terror act was really an attack against the el-Sisi government, which has taken sides with the Assad regime. Tourism, a source of major government revenues, is dead in Egypt.

This is one more reason why eradicating ISIS and its terror is a responsibility the world cannot defer. This Islamic terror is a cancer that has to be removed in its entirety but won’t unless Assad is also removed from power.

Russia has also kept from blaming the October 31 crash, which killed everyone on board, on terrorists, however President Vladimir Putin on Friday ordered a ban on all Egypt flights for the time being.

The Islamic State group’s branch in the Sinai claimed responsibility after the crash and said it downed the plane in retaliation for Russian air strikes in Syria, but it has not said how.

Medvedev said about 80,000 Russians were vacationing in Egypt at the time when Putin ordered the halt, as Red Sea resorts are extremely popular among Russians during winter.

He said at a government meeting Monday that “this security measure is necessary until the reason for the A321 crash is known.”

Since Friday, about 25,000 Russian citizens have been returned from Sharm el-Sheikh, Hurghada and Cairo via special flights, with their luggage flown in separately, said Arkady Dvorkovich, a deputy premier.

Russia will need two more weeks to bring the remaining tourists back home, he told Medvedev at the meeting.