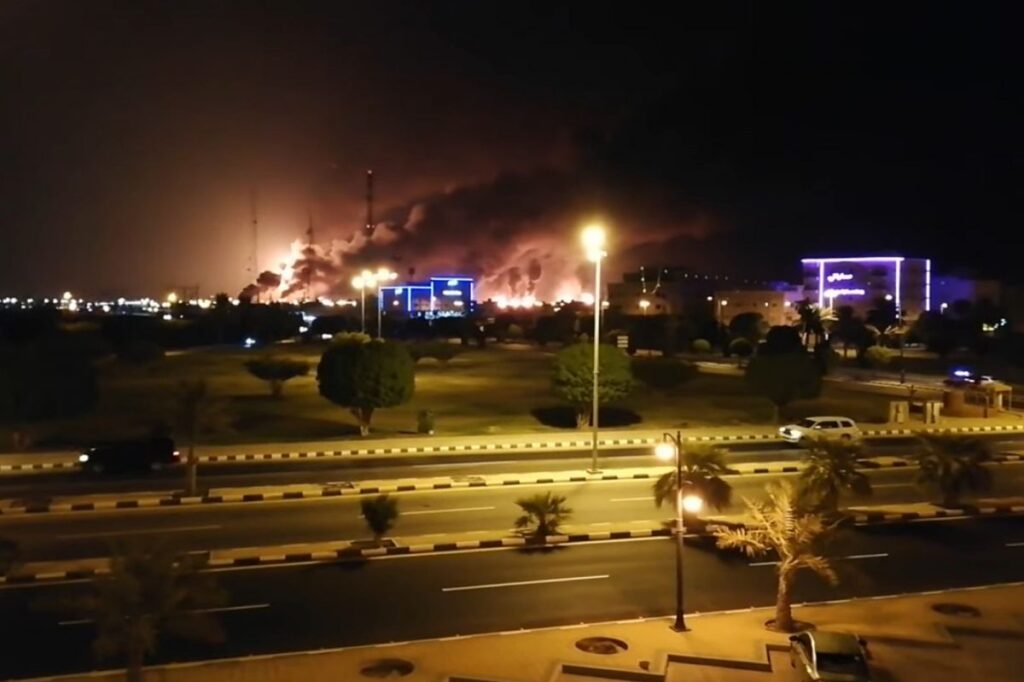 Today, U.S. President Donald Trump said that the United States was “locked and loaded” for a potential response to the attack on Saudi Arabia’s oil facilities. It came on the heels of a senior official in his administration blaming Iran for the attack. Trump is too little too late as his response summarizes the detriments of non-intervention and Trump Obama moment on Iranian terror.

Saudi Arabia oil supply was attacked. There is reason to believe that we know the culprit, are locked and loaded depending on verification, but are waiting to hear from the Kingdom as to who they believe was the cause of this attack, and under what terms we would proceed!

What does that mean? Trump delivers an Obama moment during a heightened crisis. His own presidency might by at stake here, and all the Trump could muster is a euphemism.

If President Trump does not respond immediately with force and determination, the Mullahs, once again, would win this war. Unlike the 59 Tomahawk missiles he fired on the Assad regime, in April of 2017, causing little damage to his regime, Trump must respond with a sustained air campaign to neutralize Iran permanently.

Oil prices surged more than 15% at the open on Sunday on worries over global supply and soaring tensions in the Middle East. State oil giant Saudi Aramco said the attack on Saturday had cut output by 5.7 million barrels per day.

Earlier in the day, a senior U.S. official told reporters that evidence from the attack indicated Iran was behind it. The attack hit the world’s biggest oil-processing facility,

Iranian Foreign Ministry spokesman Abbas Mousavi dismissed the U.S. allegation it was responsible as “pointless”. A senior Revolutionary Guards commander warned that the Islamic Republic was ready for “full-fledged” war.

All American bases and their aircraft carriers in a distance of up to 2,000 kilometers around Iran are within the range of our missiles.

The anonymous U.S. official said on Sunday there were 19 points of impact in the attack on Saudi facilities and that evidence showed the launch area was west-northwest of the targets – not south from Yemen.

SAUDIS POINT THE FINGER AT IRAN

The official added that Saudi officials indicated Iran used cruise missiles in the attack. The Houthis have no access to the technology.

There’s no doubt that Iran is responsible for this. No matter how you slice it, there’s no escaping it. There’s no other candidate.

Riyadh has accused Iran of being behind previous attacks on oil-pumping stations and the Shaybah oil field, charges that Tehran denies. Saudi Arabia has not yet blamed any party for Saturday’s strike. Riyadh also says Tehran arms the Houthis, a charge both deny.

Aramco gave no timeline for output resumption. A source close to the matter told Reuters the return to full oil capacity could take “weeks, not days”.

Traders and analysts said crude may spike to as high as $100 a barrel if Riyadh fails to quickly bring back supply.

Another source briefed on the developments said Saudi oil exports would continue to run as normal this week thanks to large storage in the kingdom. It ships more than 7 million barrels daily to global destinations.

Abqaiq is the nerve center of the Saudi energy system. Even if exports resume in the next 24 to 48 hours, the image of invulnerability has been altered.

U.S. Secretary of State Mike Pompeo said earlier that there was no evidence the attack came from Yemen.

Amid all the calls for de-escalation, Iran has now launched an unprecedented attack on the world’s energy supply.

The European Union warned that the strikes posed a real threat to regional security, Britain called them a “reckless attempt” to disrupt global oil supplies and France said such actions could only worsen the “risk of conflict”.

The attack impacts every democracy in the western hemisphere. Higher oil prices at the pump play a role in ousting an incumbent president or prime minister. By attacking Saudi oil facilities, Iran just responded to the demise of the Iran Deal the best way it knows how: Through sheer terror.

This is America’s only chance to rid the world of Iranian terror.

Reuters contributed to parts of this article.